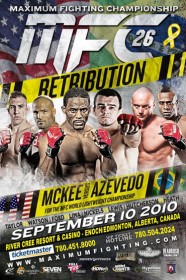 Undefeated in the last seven years, McKee has stated he will retire from competition if he can not finish Azevedo. Azevedo has vowed to take McKee’s title and end his career. McKee is one of the best fighters never to fight for Zuffa. If you haven’t seen the interview, check out this video where he called out B.J Penn earlier this year.