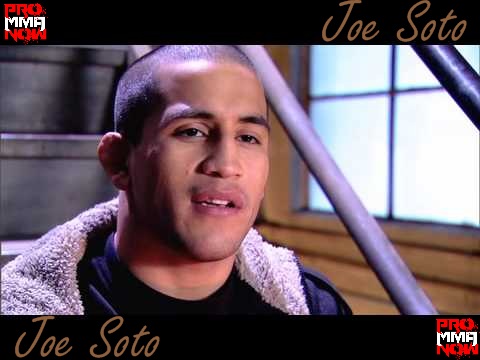 Joe “The Hammer” Soto‘s meteoric rise to become the very first Bellator featherweight champion is the type of success every novice MMA fighter dreams about. Soto had nine fights and nine victories; four wins by (T)KO, four wins by submission and only one decision. Not only is he a finisher, but he’s very well-rounded.

The pride a Bellator champion feels comes from knowing they earned their position by defeating the best fighters in the promotion. Joe Soto earned the featherweight title during Bellator’s 2009 inaugural season by defeating Ben Greer in April, Wilson Reis in May, and Yahir Reyes in June. Three opponents in three months, all finished.

After that, he had to wait until Bellator found him a challenger during their season two tournament. While waiting for a contender, he submitted Mike Christensen with a round one gogoplata at Tachi Palace last October, then stopped Diego Saraiva via TKO in May of this year in a Bellator non-title affair.

In the meantime, Joe Warren emerged as a challenger to Soto’s featherweight title. Like Soto had done the year before, Warren fought three times in three months. He defeated Eric Marriott, Georgi Karakhanyan and Patricio Freire in April, May and June of this year. However, unlike Soto, and mainly due to Warren’s wrestling style, all three wins came via decision.

Soto and Warren faced off this past Thursday, Sept. 2, at Bellator 27 in San Antonio, Texas. As the fight began, and as expected, it became obvious Warren was at a severe disadvantage on the feet. Soto was having his way with him, picking him apart and rocked him with several big shots and combos throughout the first round.

Warren somehow hung tough. He tried for several takedowns but was stuffed every time. No one was giving Warren a shot on his feet and felt if he was going to win this fight his only chance would be to get it to the ground.

Then something happened. Much like the shot Matt Serra dropped Georges St-Pierre with at UFC 69 to take his title, Soto got caught in the same spot behind his ear early in round two. A few moments later the fight was over and Joe Warren was the new Bellator featherweight champion.

Just one day after this devastating loss, Joe Soto was gracious enough to talk to ProMMAnow.com about what happened. How did the fight slip away from him after dominating so heavily in the first round? We wanted to find out in his own words what he felt went wrong , how he’s doing, if there’s anything he should have done differently and what the future may hold.

Pro MMA Now: Joe, thanks for taking the time to speak with us here at ProMMAnow.com. How are you feeling today physically, were there any medical issues for you following your fight Thursday night at Bellator?

Pro MMA Now: Take us through the last couple of days leading up to and then the day and night of the fight. Joe Warren had been talking quite a bit. What was your attitude come fight time, were you just ready to shut him up? How much had his talking got to you?

Joe Soto: Leading up to the fight I felt great, confident and was ready to go to war for the fans. Yes Joe Warren had been talking a lot. Leading up to the fight I kept reminding myself not to let it get to me, just to go in there as a professional and do my job. But walking out to the ring Joe Warren yelled something to me that created a spark and I became filled with emotion. I tried to calm myself as I walked into the cage but when the bell rang my emotions got the best of me.

Pro MMA Now: At one point you had said you “never wanted to lose to a dirt bag like that.” What is it about Joe Warren that made you feel like that?

Joe Soto: What I meant about the dirt bag statement was Joe Warren’s lack of respect for opponents and trash talking.

Pro MMA Now: Do you feel he is a poor representative of MMA? If so, why?

Joe Soto: I don’t know if he’s a poor representation of MMA, but he’s has a personality that rubs me the wrong way. And it definitely got to me when I didn’t think it would.

Pro MMA Now: Take us through round one… What was going through your mind as the fight progressed through those first five minutes?

Joe Soto: In my mind I just keep thinking how I wanted to embarrass him and humble him and shut him up.

Pro MMA Now: You were just shutting him down. He wasn’t able to take you down. You were picking him apart on the feet. Do you think there’s anything you could have done differently to maybe finish the fight in round one? I heard one analyst say on the radio today that he thought you had Warren hurt enough that you could have finished him if you had poured it on. Do you agree?

Joe Soto: Looking back on it all now I think there were plenty of opportunities and openings to take him down and finish the fight. I tried my best to finish the fight standing and I kept thinking the next punch would do that, but it didn’t happen.

Pro MMA Now: What did your corner say to you in between rounds? Did they give you any advice or comments?

Joe Soto: Yes they told me to keep my hands up and to look for the take downs.

Pro MMA Now: Have you had a chance to watch the fight yet? What do you think went wrong; do you think you got over confident or did you just get caught?

Joe Soto: Yes I’ve watched the fight and I believe I got over confident and I just got caught. Got hit with a punch in back of the head that I didn’t see.

Joe Soto: All I remember was waking up on my knees with Warren punching me and saying to myself what the hell happened, then I tried to get up then got hit with the knee. But I didn’t remember the knee either until they told me. Basically all I remembered from the second round was being on my knees and getting hammered punched.

Pro MMA Now: Did you and Joe Warren have any words after the fight, did he say anything to you?

Joe Soto: Yes, Warren came over and said he was sorry for all the trash talk that he didn’t mean it and that it was just to hype the fight.

Pro MMA Now: What’s your mindset right now, how are you feeling mentally, what’s next for you and where do you go from here?

Joe Soto: My mindset right now is it’s OK. I’ve been through more then a MMA loss. I’m a young fighter that had to learn a hard lesson, to always stay professional and never mix business with pleasure. Next for me is to go back through the tournament, earn a rematch and do everything over the right way.

Pro MMA Now: Joe thank you for talking with us. I know you will bounce back from this and come back stronger. Thank you for laying it on the line out there for all of us. Is there anything you’d like to say to your fans out there?

Joe Soto: Just want to say sorry to all my fans, I let my emotions get the best of me, but I’ll be back as a smarter and more dangerous fighter.