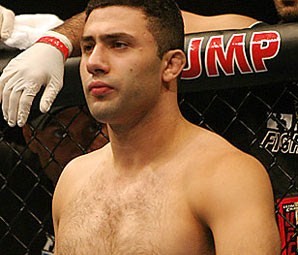 Although UFC President Dana White said Karo Parisyan would never fight for the UFC again, apparently “The Heat” has signed a new three-fight deal with the organization and has been offered a fight against Dennis Hallman at UFC 123, which is expected to take place on Nov. 20 in Auburn Hills, Mich.

The report states both fighters have verbally agreed to the match-up, though no bout agreements have yet been signed.

Hopefully Parisyan has dealt with the issues that plagued him prior to being released from the UFC last year. In the past, he has publicly talked about suffering from panic attacks and it affecting him during fights. It may have also led to him pulling out  fights at the last minute such as what happened in his last scheduled UFC bout against Dustin Hazelett at UFC 106.

Parisyan has fought once since leaving the UFC. He defeated Ben Mortimer via second round submission at Impact FC 1 in Australia back in July. Although Parisyan has been fighting professionally since 1999 and holds a record of 19-5-0, 1 NC, he just turned 28-years-old last week.

So, who’s taking bets on whether Karo shows up to his first fight? If I remember correctly, at his Impact FC fight, Karo got them to move his fight up to the first televised fight so he could hurry up and get finished so his family wouldn’t worry.

“This was my first fight that I was away from my family, and I knew they were freaking out at home,” Parisyan told Sherdog.com. “My sister was at home throwing up. I felt like it would be better for them, and for me, if I fought first, and I could get it over with so they could stop worrying.”

“Karo came to me, and said it was really important for him to be the first fight of the night, so we made it happen,” said Impact FC promoter Tom Huggins.

I don’t know about you, but that sounds like a strange excuse for someone to hurry up and get their fight over with, like someone who’s still dealing with panic attacks. Just a thought.