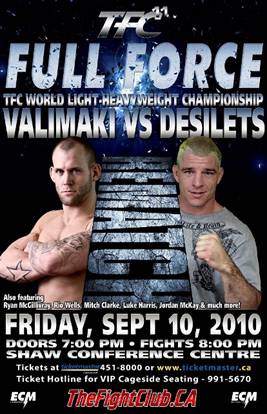 Lynn pulls out due to injury; Markhaile “Showtime” Wedderburn to step in

Edmonton, Alberta (Canada): Rising Canadian fight promotion The Fight Club (TFC) today announced the finalized fight card for their next event, “TFC 11: Full Force.” This exciting event will take place on Friday, September 10th at the Shaw Conference Center. In the main event, one of the most anticipated rematches in Canadian MMA history will commence, as newly-minted TFC Light Heavyweight Champion Martin “The Stress” Desilets (10-2) and UFC veteran Victor “The Matrix” Valimaki (16-6) will lock horns for the belt. Also on the line will be the TFC Canadian Lightweight Championship as undefeated Edmonton native Mitch Clarke (7-0) will battle Josh Machan (7-3). In addition, top Canadian welterweight Ryan “The Kid” McGillivray (10-4-1) will put his talents on display against three-time TFC veteran Markhaile “Showtime” Wedderburn (10-7), who will be taking the place of the injured Adam Lynn (13-8). Doors for this exciting nine-fight event will open at 7 PM, and the fights will begin at 8 PM. Tickets are available through Ticketmaster, http://www.thefightclub.ca/, or (780) 451-8000.

In their first bout, which took place at “TFC 10: High Octane” this past March, Martin Desilets and Victor Valimaki laid it all on the line, throwing punches with abandon. In the end, Desilets was able to outlast his foe en route to a TKO victory with only ten seconds left in the first round. He gained Valimaki’s light heavyweight strap in the process. Check out the full fight here: http://www.youtube.com/watch?v=eEVf9dK3NR4. Now, these two will look to exceed their performances from their first fight at “Full Force.” Valimaki will attempt to regain his lost crown, while Desilets will do everything he can to hold onto it. Regardless of who comes out on top, the true winners will be the fans.

In a battle for the TFC Canadian Lightweight title, the undefeated Mitch Clarke (6-0), a native of Edmonton, will fight Josh Machan (7-3, seven straight victories), who hails from Red Deer, Alberta.  This scrap features two top young Canadian lightweights, and is sure to electrify the crowd.

With the TFC World Welterweight Title declared vacant due to the departure of Ryan Ford from the organization, TFC’s top welterweight contender, Ryan “The Kid” McGillivray, is now in the spotlight. “The Kid” has only been competing in mixed martial arts for the past four years, but has quickly established himself as one of the top Canadian prospects in the welterweight division. All of Ryan’s fights have been in and around his hometown of Edmonton, so he is very well-known in the local MMA community, and he has built a loyal and enthusiastic fan base. And with eight of his ten victories coming via submission, fans know that they can always expect an exciting fight for McGillivray. He’ll be facing a strong Muay Thai fighter in Markhaile “Showtime” Wedderburn. This tough Canadian fighter has fought top 170ers such as Ford, Jason High, and Dan Grandmaison. It will truly be a test for “The Kid.”

Here is the finalized fight card:

The event will be shown on The Fight Network on tape delay, and news on a press conference will be announced soon. For more information, please visit our website at http://www.thefightclub.ca/