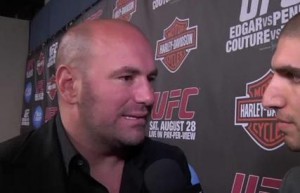 UFC President Dana White has no regrets about putting professional boxing champion James Toney in the Octagon against Hall of Famer Randy Couture… once. However, he says we won’t be seeing “The Dark Prince” inside the cage reserved for the world’s top MMA fighters any more.

And when asked what if other boxers such as Floyd Mayweather Jr. wanted to try their hand against one of the UFC fighters, White says the result would be exactly the same as what happened with Toney vs. Couture.

White defends the performance of Frankie Edgar and dismisses critics who say he may not have the most entertaining style. White also denies to comment on the strained relationship between he and B.J. Penn, simply saying that any problem between them is coming from Penn.

On this point I would like to comment a bit. Penn said in a recent interview that he wishes his relationship with White was better and this statement has prompted questions as to what might be the beef. Well, most probably it has to do with Penn’s book, Why I Fight. Having read several excerpts from the book myself, it paints a very grim picture of White and the UFC’s business practices when dealing with their fighters. My guess is White has taken offense to this. Frankly, it’s hard to see how he couldn’t be offended. It’s not pretty.