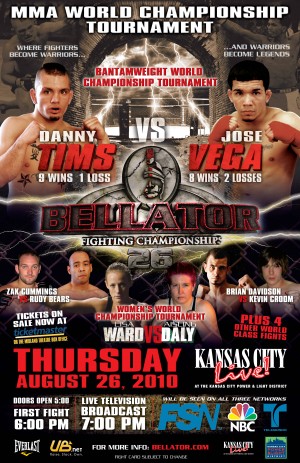 Round 1 – Carl gets a takedown right off the bat. Stinson goes for an armbar but Carl gets out. Stinson then attacks with a triangle, Carl picks him up and slams him hard but Stinson doesn’t let go. He eventually turns it over and is on top. Carl eventually escapes and they scramble back to their feet. Carl locks on a guillotine and jumps guard, still holding the guillotine and Mr. Stinson goes nigh-night, out cold.

Round 1 – They clinch. Ward turns Daly into the cage, Daly reverses but Ward puts her on the ground and is in half guard. Ward holding on to Daly’s neck, lets it go and lands a couple of little shots with her left hand. Daly holding on from bottom with her legs trapping one of Ward’s legs in half guard. Ward lands a few punches to the body while holding onto her neck with the other arm. Ward controlling but doing little damage. Nice punches from Ward as she postures up; she lands a flurry of shots from the same position. Daly still trapping the single leg of Ward. Daly is from Ireland, has bright pink hair. A minute left in the round. Daly still controlling from top position and lands a few punches before the bell sounds. 10-9 round for Ward.

Round 2 – Ward takes Daly straight to the ground, but can’t hold her there long this time. Daly back to her feet and they are clinched against the cage. They separate, Ward lands a few shots and gets the takedown, lands in side control. Ward holds a guillotine position but lets it go and Daly is on top now in half guard. Ward scrambles and Daly ends up in north south position to the elation of the male fans. Daly moves to side control as she escapes her head from a scissors lock. Ward gets to her feet, throws some punches but Daly takes her down with a single leg. Ward lands a punch. 10-9 for Ward.

Round 3 – Nice left from Ward scores. Ward gets the takedown and lands on top in half guard. Ward lands a few punches to the body.Ward takes her back with both hooks in. Ward has a dangerous rear naked choke. Daly stands up and rolls forward but Ward still has control and ends up on top in half guard. Ward takes her back again with both hooks in. One minute to go in the fight. Ward gets a body triangle  momentarily, but goes back to both hooks in. Daly scrambles, turtles up and Ward has her back, flattens her out and lands some punches to the face as Daly rolls. Ward 10-9 and 30-27 as I see it.

Round 1 – This is a bantamweight quarterfinal. Tims catches Vegas with some shots that rock him right off the bat. They both were exchanging but Vega got clipped. Vega shoots and puts Tims on his back, now in half guard. Tim gets full guard. The crowd is cheering loudly. Vega working diligently from full guard, postures up with a big right hand. Tims threatening from the bottom with different looks. Throws up an armbar attempt, again. Tims looking for a number of subs and Vega is defending well, while continuing to soften Tims up with hammerfists and punches to the body and head. Tims locks on an armbar, it’s tight but Vega escapes. Vega in north-south, attempts a choke but Tims is free. 1:45 left in the round. Tims scrambles, gets on top, they stand and Tims lands a nice right. Tims slips to the ground, gets right up. Leg kick Vega. Tims falls to his back after a glancing left hook. Tims pulls guard. Vega in half guard. Tims reverses and ends up on top in full guard. Exciting fast-paced round. 10-9 Vega.

Round 2 – Tiims with a slow spinning back kick from about five feet away. Vega throws Tims down but lets him up. Nice left from Vega, then a leg kick. Again with two lefts from Vega and another leg kick. Push kick from Tims misses. Leg kick from Vega slides up to the groin. Time is called. Tims comes in swinging wild but Vega stands his ground and lands some too. Vega with a leg kick. Beautiful loud switch kick from Vega. Vega lands some big punches and Tims gets popped. Tims shoots but Vega escapes and lands a punch. Leg kick Vega. Beautiful body shot from Vega and it appears to knock Tims to the ground although the commentators say it didn’t. I think it did. Tims shoots and ends up underneath Vega in north south. Tims holds on to Vega. Vega landing occasional punches, moves to side control. He traps one arm with his legs and is punching Tims. 10-9 for Vega.

Round 3 – This is a raucus crowd. Vega with the leg kick and a left hook. Tims falls to his back, gets up. Big leg kick from Vega. Nice one two from Tims and he eats a low blow. Big leg kick from Vega. Leg kick from Vega. Tims shoots for a double, Vega defends well. They exchange punches. Leg kick Vega. The crowd is loving this fight. Nice straight left from Tims. Vega lands a nice shot and a leg kick. Leg kick Vega then he knocks Tims’ mouth piece out with a stiff left jab. Tims  moving forward and gets taken down via double leg. Vega inside Tims’ full guard. Vega can ride this out for a win. Tims threatening with a kimura but Vega gets out. Tims’ attempts are stifled from Vega on top. Vega 10-9, 30-27 as I see it.

Round 1 – Oleinik landing a few good punches during an exchange, but ends up on his back, looking for a triangle/armbar. Oleinik is in position for a straight arm bar, has his legs around Hayes’s shoulders. Hayes gets out and up. They square up. Oleinik shoots, gets a single. Hayes trying to get away but Oleinik fights hard for it. Hayes is free. Oleinik lands a right and throws a combo, shoots, pulls guard. Oleinik looking for a submission armbar as Hayes punishes with punches from inside the full guard. Oleinik has a tight closed guard, throws up his legs for an armbar, but Hayes continues to defend and land the occasional body shot and head shot hammerfist. Oleinik  comes very close to locking up an armbar, but turns to turtle position, grabs a single leg. Hayes doing NO damage at all. Oleinik lands a knee as they stand. Hayes grabs the clinch and throws a knee that either misses or barely lands. They both throws several punches before the bell sounds. I give the round to Oleinik 10-9, although the judges may disagree because Hayes was on top more.

Round 2 – Hayes pushes Oleinik into the cage, has a body lock. Hayes lands a good knee to the face. Hayes with the foot stomps. Hayes slings Oleinik to the ground rather easily.  Oleinik  has  half guard, now full guard. Oleinik looking for an armbar. Hayes defending but doing NO damage. Oleinik continues to threaten with armbars and triangles. Hayes isn’t even throwing punches at this point. Now finally starts throwing little tiny punches. I don’t understand Hayes here. He could be landing shots. He’s looking for a crucifix. Ref finally stnads them up with 15 seconds to go. Hayes lands a big punch and tries to lock on a guillotine as Oleinik goes down. It looks like Oleinik was bleeding pretty significantly even prior to the final punch. I’ll give that round to Hayes for that one punch 10-9.

Round 3 – Oleinik comes in, and lands a few shots but Hayes fires back and lands some shots. Oleinik grabs a clinch and pulls Hayes to the ground. Hayes is bleeding very badly. The ref stops it to check the cut. They said it was caused form an accidental head butt. They restart them in the center of the cage on the ground. Oleinik is on top inside Hayes’s guard. They didn’t even wipe Hayes off from what I saw. The cut is on Hayes’s eylid and is all over his face and eyes. Oleinik gets swept and Hayes is on his feet. Oleinik lands some good rights and Hayes fires back. Oleinik goes for a takedown but ends up on the bottom with Hayes in half guard. Two minutes to go. Hayes’s white shorts are red from the blood. Hayes lands a few hammerfists from top position. One minute to go. Oleinik has an open guard but Hayes turns hiim to the side. Oleinik gets up, Hayes clinches and lands some knees. I give that round to Hayes 10-9, but the fight to Oleinik 29-28.