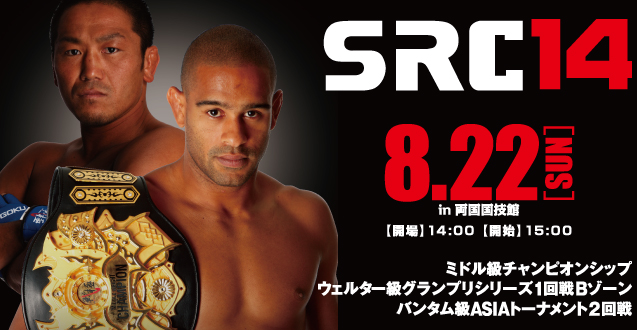 World Victory Road returns with SRC 14. The card, which will be broadcast live in the U.S. on HDNet, will take place on Sunday at 2 a.m. EST. Headlining the card is a middleweight title rematch. Jorge Santiago will defend his belt against Kazuo Misaki.

SRC Middleweight Championship Match
Jorge Santiago (22-8) vs. Kazuo Misaki (22-10-2)
In their last fight, Misaki was clearly ahead on the cards heading into the final round. Santiago pulled off a rear-naked choke and took the title. Misaki should be able to dominate the fight again and this time avoid the submission. Plus, Santiago’s chin always gives his opponents a legitimate chance to win.
Pick = Kazuo Misaki

Akihiro Gono (32-15-7) vs. Jadamba Narantungalag (2-2)
After spending a large portion of his career at middleweight, Gono will make his lightweight debut here. Narantungalag will be the better striker, but Gono will be able to dominate the fight on the floor. Narantungalag has been working with the newly formed Team Asashoryu, but he has not had enough time to pick up credible takedown defense. Look for another submission win for the “Magic Man.”
Pick = Akihiro Gono

Hatsu Hioki (21-4-2) vs. Jeff Lawson (14-3)
Lawson has built a respectable record by out grappling fighters on the local level. However, here he is up against one of the best grapplers in MMA. Hioki’s long legs will help him neutralize Lawson from the bottom, and on top he can cut through pretty much anyone’s guard. Let’s hope after this SRC sets up a match between Hioki and Marlon Sandro.
Pick = Hatsu Hioki

Welterweight Tournament First Round
Taisuke Okuno (9-4-2) vs. Nick Thompson (38-12-1)
Thompson is currently riding a two-fight losing streak, but that does not really matter when it comes to this fight. Okuno is the kind of guy who can make a living fighting on the lower levels of MMA. He is not a top-level fighter. Look for Thompson to avoid an early flurry of punches and start working his jab. After finding the distance, he should be able to score a knockout. In fact, he should be able to finish the fight any way that he wants.
Pick = Nick Thompson

Welterweight Tournament First Round
Yasubey Enomoto (4-1) vs. Kenta Takagi (6-2)
Enomoto made his SRC debut in dramatic fashion. He finished Pride FC Legend Sanae Kikuta in less than four minutes. For his fifth fight, he will meet Takagi. Both fighters like to throw leather on the feet, so this could be a “Fight of the Night” brawl. However, Enomoto’s game is much more well rounded, so he should be able to take the fight to the ground and pick up the win.
Pick = Yasubey Enomoto

Leonardo Santos (7-3) vs. Sotaro Yamada (6-4-1)
Two years ago, Yamada walked away from MMA to focus on his grappling game. During his hiatus, he won a FILA World Pankration championship and pick up a submission victory over ADCC veteran Ryan Hall in a grappling match. However, in this fight, Santos will still be the better grappler. Hopefully the fight turns into a back and forth grappling battle.
Pick = Leonardo Santos

Motoki Miyazawa (6-2) vs. Takuya Sato (5-3-2)
Sato road his top-game to a 2008 Shooto rookie championship. He excels when he is able to get on top and push a pace on his opponents. However, Sato’s losses have come when he gets lost in scrambles and submitted. Miyazawa is the superior submission fighter, and he has only lost when he has taken a step up in competition.
Pick = Motoki Miyazawa

Bantamweight Asia Tournament Second Round
Shintaro Ishiwatari (8-3-3) vs. Kil Woo Lee (1-1)
Ishiwatari’s ridiculous slam knockout of Kazuhiro Ito made him an instant viral-video sensation. His hype train was derailed when Chan Sung Jung eliminated him from the SRC featherweight tournament. Now, he has dropped down to bantamweight. In the first round of this tournament, he picked up another highlight-reel knockout. Look for this fight to the same way.
Pick = Shintaro Ishiwatari

Bantamweight Asia Tournament Second Round
Takuya Eizumi (7-5) vs. Shoko Sato (8-3)
This is the type of fight that would excite the new bread of Twlight/MMA fans. Both fighters will look to strike. Eizumi will be the better technical striker, and he will have the power advantage. That makes picking this fight extremely easy.
Pick = Takuya Eizumi

Bantamweight Asia Tournament Second Round
Tatsuya So (6-4-1) vs. Wataru Takahashi (11-13-4)
Takahashi began his career at welterweight, and now he has whittled himself all the way down to bantamweight. He will be the more experienced fighter and the much better grappler. Look for Takahashi to plant So on his back and keep him there.
Pick = Wataru Takahashi

Bantamweight Asia Tournament Second Round
Hirokazu Nishimura vs. Jae Hyun So
Despite having a losing record, So has a pretty respectable grappling game for this level. He should be able to get takedowns and control the pace of the fight. His most impressive victory came against Sengoku Gold Cup participant Ryosuke Komori.
Pick = Jae Hyun So