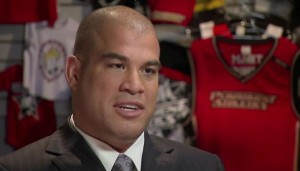 If you have been around the mixed martial arts world for any length of time, no doubt you have heard the infamous story about London Shootfighter “Lightning” Lee Murray (now doing a ten year prison bid for bank robbery – a BIG bank robbery) knocking out Tito Ortiz in a street fight following UFC 38 in London in July 2002.

One reason the story was such a big deal is that Tito was the UFC light heavyweight champion at the time and was considered at the top of his game and the best in the world in his division. So to have this virtually unknown MMA fighter who was more of a street thug than anything, lay you out cold in an alley, well, let’s just say… that’s not the kind of press you want as a UFC champion.

Matt Hughes talks about the story in his book Made in America. He was in London for UFC 38 at the time when Pat Miletich came to his hotel room in the middle of the night and woke him up right after the street fight to tell him what happened. Miletich said,

“The entire alley erupted into a huge brawl. I was just standing there, and there were bodies flying all over the place. I was confused how it all happened, because it happened so fast. I was standing there with my mouth open like ‘what the hell is going on?’

Both their jackets come off, and Tito throws a left hook at Lee Murray and misses, and right as he missed, Lee Murray counters with, like, a five-punch combo, landed right on the chin, and knocked Tito out. OUT.

Tito fell face-first down to the ground, and then Lee Murray stomped him on the face a couple of times with his boots.

Then Tony Fryklund and I grabbed Lee and pushed Lee and said ‘Get out of here!’ And Lee said ‘I’m sorry, I’ll see you later,’ and took off. And Tony Fryklund helped Tito to his feet.

Then these English Bobbies showed up and they were threatening to spray the entire crowd with huge canisters of mace. ‘You think you’ve got problems now?’ I said. ‘You spray this entire group of fighters with mace and we’ll all be in a heap of trouble.’ So I talked the police out of doing that. And then Tony and I got a cab and we headed back here.”

Michael “The Voice” Schiavello sat down with Tito Ortiz on the latest episode of his HDNet show and talked to “The Huntington Beach Bad Boy” about the legendary street fight with Lee Murray. Of course, as one might expect, Ortiz’s version of the story is just a little different.

One thought on “MMA legends: Tito Ortiz denies Lee Murray knocked him out in a street fight”