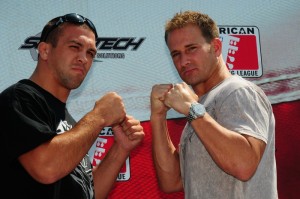 ST. CHARLES, MO (August 14, 2010) – Josh Neer didn’t engage in a stand-up battle with Jesse Finney like he suggested he might in Saturday’s main event of Fight Me MMA 1: The Battle Begins! Finney vs. Neer at the Family Arena just outside of St. Louis.

Instead, the UFC veteran finished with a dominating win.

In front of a sold-out pro-Finney crowd, Neer repeatedly took down the St. Louis native, finishing him off with a guillotine submission late in the first round.

After the heated talk leading up to the fight, the victory tasted especially sweet for Neer (28-10-1). “This is definitely pleasing,” Neer said. “I like to embrace the fight. I love to fight and when I get in there, I want to have a good time. “I had a lot of fun in there.”

He wasn’t alone on a festive and action-packed night. It was a rewarding night for the Fight Me promotion, which entered the mixed martial arts game with a successful and entertaining debut night in front of an energetic crowd.

Neer fed off that, intensely staring down Finney before handing the Strikeforce veteran his first career loss. Neer appeared to have the strength advantage, taking Finney down and mounting him twice in the first round. Finney (6-1) gallantly battled through most of it, but one last powerful surge from Neer was enough for “The Dentist” to pick up the victory. “I wanted to take him down,” Neer said. “My guys kept telling me, ‘Let’s take him down and beat him up’ and that’s what I did.”

In the co-main event, Brendan Seguin (21-17-1) continued on a career re-birth, as he stopped Lucas Lopes (19-10) due to strikes. After taking a flurry of leg kicks in an explosive first round, Lopes obtained a shin injury, leaving him unable to answer the second-round bell. “It kind of surprised me,” Seguin said. “I was looking to finish and I really worked hard and trained for this fight. I was landing my kicks and he was checking his. It split his shins and he couldn’t walk.”

A veteran with a decade’s worth of experience, Seguin is now 3-0 in 2010 and 4-1 in his last five fights. The Detroit native said the answer for the turnaround is simple. “I feel great. I feel unstoppable right now,” Seguin said. “I’m going out hard and trying to break their will. “I feel good about where I am. I’m getting my mental state straight and getting in some great training. Preparation has been a huge key to my success.”

In another noteworthy bout, Kiko France got the better of former “Ultimate Fighter” and UFC veteran Cale Yarbrough with a second-round arm-triangle choke. Yarbrough seemed to be getting the better of exchanges on the feet in the second round, but France got the fight to the ground and immediately maneuvered into the choke. It stopped Yarbrough’s (7-2) seven-fight winning streak, giving France (6-1) his sixth submission win.

Strikeforce veteran Darryl Cobb (8-1) picked up his eighth straight win with a unanimous decision victory against Sean Huffman. Lance Benoist moved to 2-0 – and gained a $5,000 bonus – with a head-kick knockout in the first round against Cleburn Walker. Other winners included Josh Sampo (3-0), Brian Green (22-12), Luke Gwaltney (13-14), Abel Trujillo (2-2) and Chuck Parmelee (35-8).

“It was an amazing night and I’m just so impressed with how these fighters performed,” Fight Me CEO and President Kenny Nowling said. “The crowd was great and it turned into a memorable night for Fight Me’s first event.”

Fight Me 1: The Battle Begins! Finney vs. Neer Official Results:

ABOUT FIGHT ME MMA
Based in O’Fallon, Missouri, Fight Me is a new mixed martial arts league that will showcase the world’s best and brightest fighters. It’s unique event operations style and business model separates it from other organizations. Fight Me caters to the fan by providing non-stop action and entertainment.