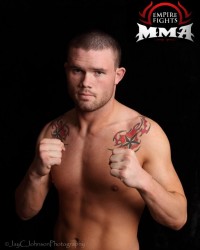 Two of the top lightweights in the Southeast, Austin Lyons and Zach Underwood will fight for the Empire Fighting Championships Lightweight belt at “A Night of Reckoning IV” at Harrah’s Casino in Tunica, MS on October 9th, 2010.

Both fighters are considered to be two of the best lightweight prospects in Tennessee and have more than earned their title shot by winning on earlier Empire shows.

Quietly, Austin Lyons has built a reputation as one of the toughest lightweights in the Mid-South. With a record of 3-1 and three straight submission victories Lyons is poised to take the next step in his career if he can get by Zach Underwood and win the Empire Fights lightweight title belt.

Lyons has fought for Empire twice before. In two fights at Harrah’s Lyons has two first round submission victories. His last fight against Corey Holder only lasted 1:17 into the first round before Lyons caught Holder in an armbar forcing Holder to tap.

But Zach Underwood knows something about winning in Tunica. At “A Night of Reckoning II” Underwood defeated Terry Robinson by unanimous decision in what some thought was the fight of the night.

In April 2010 Underwood was offered a chance to compete at welterweight on the undercard at Strikeforce: Nashville “Shields vs. Henderson”. Underwood grinded out a unanimous decision victory over Hunter Worsham showing the world that he is for real and could go up in weight and win a fight for one of the biggest promotions in the country.

Tyler Sory, the President of Empire Fights is excited to have Lyons vs. Underwood on the show. “Austin Lyons vs. Zach Underwood is a great main event,” exclaimed Sory. “Austin Lyons has one of the biggest followings in Memphis and his fans show up to see him fight. So far Austin is 2-0 on our shows and he’s earned the opportunity to fight for the belt.”

“But on the other hand Zach Underwood isn’t going to lay down for anyone. He won on our show back in February 2010 and then went and won on the Strikeforce show in Nashville. The guy he beat in Nashville is the Gladiator Challenge welterweight champ out in Arizona. Zach went up in weight and beat another promotion’s champ. How tough is that kid?”

In addition to Lyons vs.. Underwood “A Night of Reckoning IV” will feature Strikeforce veteran Andy “The Stunner” Uhrich vs. Charlie Rader as the co-main event of the evening as well as Strikeforce veteran Cody Floyd vs. Harry “Wildchild” Johnson.  Other local favorites featured on Oct. 9th include Jacob “Pyscho” Noe, Abe Wilson, Doug Larson, Jeremiah Trundle & Brian “The Law” Hall.