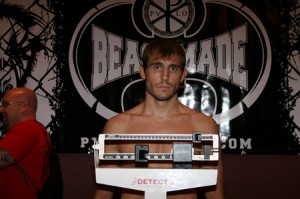 Phil Lanides recently spoke to UFC Hall of Famer Randy Couture‘s son Ryan Couture (0-0), who makes his pro debut Friday at Strikeforce Challengers 10 in Phoenix, Ariz. against Rage in the Cage veteran Lucas Stark (2-4). Both of Stark’s wins are by decision and three out of his four losses have come via submission.

This makes him a prime target for Couture’s game plan, who thinks he will get the “W” via submission:

“All of my wins have come via submission, so I’d have to go with that. But I feel like I’m pretty dangerous everywhere. My wrestling’s not where it should be yet, so there are a lot of guys that are going to beat me there. But with my submission game and decent striking, I feel like I make up for that.”

The young Couture also talks about the pressure of following in his father’s footsteps:

“Being who I am, I feel like I get a lot of extra attention, but the only extra pressure I feel is the kind that I put on myself from trying to perform to the level that I know I can. There are going to be very few people that have the kind of impact on the sport that my dad has, so thinking I will equal that would be unrealistic. So I’m just trying to do everything I can to make sure I perform to the best of my abilities. The rest will take care of itself.”

Couture’s bout with Stark will be part of the Strikeforce Challengers 10 main card which airs live on Showtime this Friday night, Aug. 13, at 11:00 p.m. ET/PT.