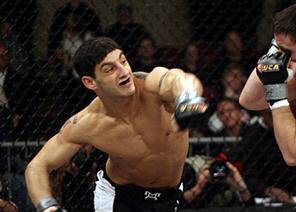 CHICAGO, Ill. (August 11, 2010) — Bellator Fighting Championships officially announced today the signing of New York native Kenny “The Tooth Fairy” Foster to its fast growing list of up-and-coming fighters.  Foster joins the promotion with an impressive 7-2 professional record, including a six fight win streak which he compiled from July 2009 to March 2010.

After a three-year 149 lbs. wrestling career at Carson Newman College, Foster found that he still had a hunger for competition.  He filled that void by competing in tough man competitions but was eventually drawn to MMA when UFC fighter Clay Guida started training at his wrestling gym.  After a successful amateur career in which he held a regional championship lightweight belt, Foster decided to begin training fulltime.  The 25 year old relocated from Georgia back to his New York roots to train with Team Bomb Squad.

“Kenny Foster has a great competitive spirit mixed with powerful wrestling skills and ever evolving striking skills which makes it very hard to count him out of match-ups at featherweight,” said Bellator Chairman and CEO Bjorn Rebney.

Although Foster has no problem drawing from his prior wrestling experience to win fights, he admittedly does not like to be categorized as a wrestler.

“I hate to even put it out there, but I’m a striker. Categorizing me as a ground fighter isn’t a fair assumption at all. All of my submission victories for my past 5 or 6 fights have come after I dropped my opponent with strikes,” said Foster. “Once I drop someone my wrestling instincts kick in and I just look for the finish.”

Whichever discipline Foster decides to use, it’s clear that he is going to “bring it” in his upcoming fights with Bellator.

“I feel like all the years I’ve been doing this have been building up to this point,” said Foster. “I feel like when I signed the contract today, it was the biggest blessing of my life. Today is the first time I truly felt like a professional. Signing a contract with an amazing organization like Bellator and now my trainer is talking about organizing my fight camp; I feel like I’m really getting the treatment now.”

Although Foster competed at lightweight the entirety of his amateur career and for his first professional fight, he plans to fight in the featherweight division for Bellator.