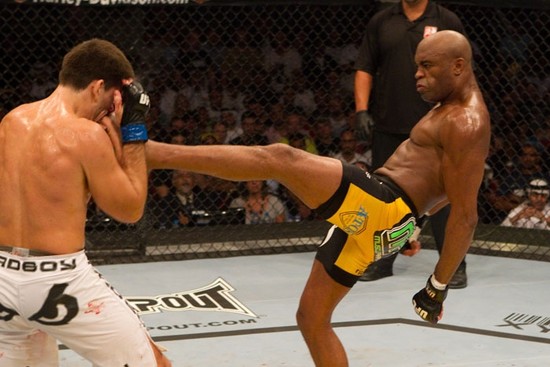 I’ll admit hoping Anderson Silva goofs around in the cage against Chael Sonnen is a bit wacky. A lot of people might think that I am crazy. Perhaps I should cut back to only eight cups of coffee per day.

However, I am willing to sit through 25 minutes of boring fighting in order to improve the landscape of the MMA world.

Where did White say this? He said it on an interview on “Jim Rome is Burning” on ESPN, the flagship of sports coverage. Anderson Silva’s actions were truly bizarre, but why did Rome pick up the phone and invite White onto the show? Wouldn’t Silva himself or Ed Soares be a much better guest?

When Terrell Owens or Randy Moss drops a crucial pass in an important game is there a line of reporters outside Roger Goodell’s office?

UFC President Dana White holds a really unprecedented position in sports. If any journalist has a question about combat sports all they need to do is ask Dana. Is Strikeforce a good promotion? Why does Anderson Silva do the things he does? Was Frank Mir wrong for saying he was going to kill Brock Lesnar? Is Lesnar really going to mount his wife tonight? All of these questions can be easily answered by asking Dana White. I’m surprised “What Would White Say?” bracelets are not in production as we speak.

On top of that, White’s answers are often shilling, pushing an agenda or downright false. You can’t blame him, because, after all, he is a promoter. He wants people to pay $49.95 for a few hours of television and buy UFC-logo lunch boxes.

After Paul Daley took an extremely late swing at Josh Koscheck, White stepped up and cut Daley from the promotion. To support the release, he referred to a previous situation involving a hospital brawl between Nick Diaz and Joe Riggs. He said, “I cut Nick Diaz after he was fighting at the hospital. People are sick and dying you can’t be in the hospital fighting. I cut the guy even though I know he’s a very good fighter.”

In reality, Diaz was never cut. After the hospital incident, he fought for the UFC three more times including a bout with Sean Sherk two months after his fight with Riggs. Despite this, no one questioned White. Kevin Iole even used the quotation as justification for cutting Daley in an article for Yahoo! Sports.

The mainstream media outlets covering the sport are truly uninformed and rely on White for information. The MMA-niche media are impaired by a crippling fear of losing press credentials and getting blacklisted.

White’s well-publicized declaration that he will cut Silva has created an opportunity. If Silva jukes and jives his way to a boring decision win over Sonnen, there is no chance that White will actually cut him. He will have once again affirmed his status as the best pound-for-pound fighter in the world and set a potentially untouchable record of seven-consecutive title defenses.

If Silva is boring and White fails to cut him, the assembled news media will have no choice but to question the colorful executive. In the end, it could lead to realistic coverage of the sport. Of course, I wouldn’t mind seeing an exciting title fight either.