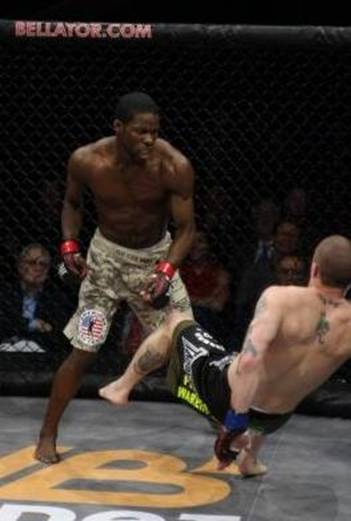 Goldsby sent a direct message to Bellator officials during Bellator 14 when he out-classed MMA trailblazer and heavily favored WEC veteran Jeff Curran in Curran’s hometown of Chicago, IL.  With the victory Goldsby staked his claim as one of the eight participants in Bellator’s upcoming 135 lb tournament.

“Bryan Goldsby is one of those guys, very much like Toby Imada, whose record does not reflect the tremendous skill and potential that he brings to the sport,” said Bellator Chairman and CEO Bjorn Rebney.  “He has very solid stand-up game mixed with speed and wrestling, which he displayed in his impressive victory over Jeff Curran, and that makes him an difficult match up for anyone in this tournament.”

Goldsby’s well-rounded ability comes from his diverse training background.  He began wrestling in 7th grade before getting his start in Tae Kwon Do when he was just 12 years old.  After finishing his military career in 2006 Goldsby began training jiu-jitsu and Muay Thai, to completely hone his game.

With a new level of confidence that stems directly from his recent victory over Curran, Goldsby fully intends to continue in his winning ways on his quest to become Bellator’s first ever bantamweight champion.

“When I get in there, I’m comfortable because I can hang wherever the fight goes,” said Goldsby. “I feel like I have the skills to beat anybody, I’m fine with whoever they decided to put in front of me.  I’m just excited for the opportunity and itching to get this thing started.”