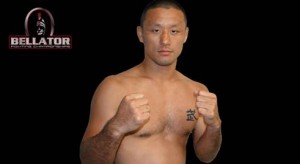 CHICAGO, Ill. (August 04, 2010) —Yoshiyuki Yoshida, a heavy handed Judo black belt and UFC veteran, has become the newest addition to the Bellator Fighting Championships’ roster, as he fights an unannounced opponent at Bellator 31 on September 30th for the chance to earn a spot in the Season 4 World Welterweight Tournament.

Yoshida is seasoned veteran of the Japanese mixed martial arts scene who quickly adapted to MMA in the US. He wasted little time choking out dangerous striker War Machine in his UFC debut with a vicious anaconda choke that came less than a minute into the first round. Yoshida also holds notable victories over the likes of Katsuya Inoue, Brandon Wolff and former UFC title challenger Dan Hardy.

“Yoshiyuki Yoshida is a multi-talented fighter with diverse abilities that could present problems for anyone in the welterweight division, said Bellator founder and CEO Bjorn Rebney.  “At Bellator we’re dedicated to providing world-class, entertaining MMA and fighters like Yoshida at allow us to accomplish just that.”

Known for his flashy submissions and knockout power, Yoshida has finished 9 of his 11 victories, with 6 being stopped early due to KO or TKO, and the other 3 being finished via submission.

“For me, this is a new challenge,” said Yoshida.  “There are many great fighters in Bellator so I am really looking forward to this opportunity,” said Yoshida.  “I really like American fans and it’s my dream to keep fighting in the States.  After the September fight, my focus will be solely on winning the Welterweight Tournament. Until then, I’m taking this one fight at a time.”