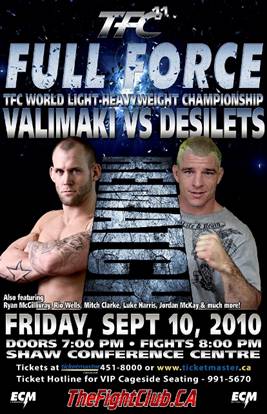 Edmonton, Alberta (Canada): The Fight Club (TFC), one of the top fight promotions in Canada, recently announced that it will return to action with “TFC 11: Full Force” on Friday September 10th. “Full Force” will showcase a main event rematch between TFC Light Heavyweight Champion Martin “The Stress” Desilets and UFC veteran Victor “The Matrix” Valimaki. The belt will be on the line as these two lock horns once again, as TFC 11 will be held at the Shaw Conference Centre in Edmonton, Alberta. Doors will open at 7 PM, and the fights will begin at 8 PM. Tickets are available through Ticketmaster, http://www.thefightclub.ca/, or (780) 451-8000.

In addition to this exciting main event, two other fights have been signed for “TFC 11: Full Force.” In a battle for the TFC Canadian Lightweight title, the undefeated Mitch Clarke (6-0), a native of Edmonton, will fight Josh Machan (7-3, seven straight victories), who hails from Red Deer, Alberta.  This scrap features two top young Canadian lightweights, and is sure to electrify the crowd. “Full Force” will be a family affair, as Josh’s brother, Ryan Machan (11-5) will move up from his lightweight status to take on James McCutcheon (3-2) in a welterweight tilt.

Also signed is a bout between two fighters with several things in common. Rio Wells (3-0) and Chuck Pelc (2-1) are both natives of Edmonton, Alberta, both compete at welterweight, both have a total of three pro MMA fights, and both are veterans of the Continental Football League. Now Wells and Pelc will lock horns in the center of the cage in order to prove who is superior.

The main event of “Full Force” is drawing a lot of interest as a fighter’s fight. In their first bout, which took place at “TFC 10: High Octane” this past March, Desilets and Valimaki laid it all on the line, throwing punches with abandon. In the end, Desilets was able to outlast his foe en route to a TKO victory with only ten seconds left in the first round. He gained Valimaki’s light heavyweight strap in the process. Check out the full fight here: http://www.youtube.com/watch?v=eEVf9dK3NR4. Now, these two will look to exceed their performances from their first fight at “Full Force.” Valimaki will attempt to regain his lost crown, while Desilets will do everything he can to hold onto it. Regardless of who comes out on top, the true winners will be the fans.

TFC Light Heavyweight Champion Martin “The Stress” Desilets (10-2-0-1) has only been to a decision once in his career, and has finished his opponent in every one of his victories. The Team Legion fighter, who trains with UFC fighter Jonathan “The Road Warrior” Goulet, is a six-foot tall native of Canada, and always brings the excitement in his bouts. He holds a TKO victory over current UFC contender Krzysztof Soszynski, and will look to make it two in a row against Valimaki at “Full Force.”

Victor “The Matrix” Valimaki (16-6), a veteran of the UFC, was riding a seven-fight win streak when he stepped into the cage against Desilets to defend his belt. Now, the nine-year MMA veteran will attempt to start another win streak by stopping the champ and getting his strap back. A native of Edmonton, Alberta, Valimaki holds victories over notables Dan “The Beast” Severn, Jason “Dooms” Day, and Vernon “Tiger” White. At “Full Force,” he’ll try to add Desilets to that list.

“Full Force” will also feature TFC favorites Ryan McGillivray, Luke Harris, Jordan McKay, and many more. Look for additional fights to be announced in the coming weeks. The event will be shown on The Fight Network on tape delay, and news on a press conference will be announced soon. For more information, please visit our website at http://www.thefightclub.ca/