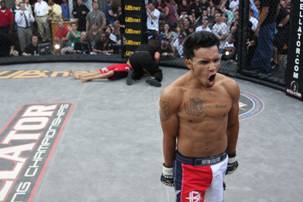 CHICAGO, Ill. (July 28, 2010) — Missouri-based brawler Jose Vega, who caught the eye of Bellator scouts and MMA fans around the country during a nationally televised “Local Feature Fight” at Bellator 22 in June, has officially been added to Bellator’s upcoming Season 3 Bantamweight Tournament.

The 24-year-old Vega brings an 8-2 record to the tournament, which begins this August. His wins include a 2008 submission of fellow tournament participant Danny Tims and, most recently, a devastating 39-second KO of veteran Jarrod Card in front of a hometown crowd at the Kansas City Power & Light District on June 17th.

Born in Miami, Vega moved at the age of 10 with his parents and eight siblings to the Kansas City area, where he was schooled in the fight game by his father.

“My dad used to wrap our hands with towels and electric tape — all of us kids — and he would have us fight each other in the middle of the living room with everyone watching,” Vega recalled. “When my dad was growing up, he used to get beat up a lot by two twins in his neighborhood. Every day after school they would wait for him and beat him up. He didn’t want that to happen to us, so he made sure that we knew how to defend ourselves.”

Vega went on to wrestle in high school and for one year in college and made his pro MMA debut in 2008 at the age of 22. Until just a few months ago, he had no formal training in martial arts but now trains part-time with Kansas City’s Team Grindhouse while working full-time as a custom cabinetmaker.

“I’m more complete now than I’ve ever been before,” Vegas said of his MMA game. “Up until right before my most recent win over Jarrod Card, I had been training myself by watching fight tapes and instructionals. Now I finally have someone watching over me telling me if what I’m doing is right or wrong. I wanted to be a part of this tournament as soon as I heard about it. I wanted to be a part of Bellator. Bellator is coming up fast and I feel like I’m coming up fast too. They gave me this shot and all I want to do is grow with them.”

“Jose showed everyone in MMA what he’s capable with his highlight reel knockout at Bellator 22,” he said. “Part of the beauty of Bellator is that a fighter like Jose can come out of virtual obscurity to make a name for himself and will keep fighting for us as long as he keeps winning. Jose definitely has the tools to go far in our Bantamweight Tournament and I look forward to watching him compete come August.”