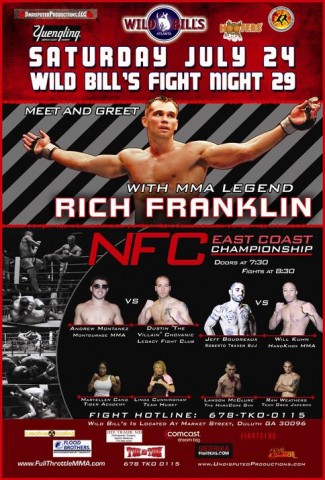 In a highly anticipated main event and a fight that was supposed to happen on three previous occasions, Hard Knox MMA’s Will Kuhn will take on Jeff Boudreaux, who fights out of Roberto Traven BJJ. There has been quite a bit of trash talk between these two and it will finally get settled tonight.

Also on the card, Strikeforce veteran Andrew Montanez will take on Dustin Chovanic in what will be Chovanic’s seventh straight Wild Bill’s fight, and Greg Jackson fighter Ran Weathers will look to bounce back after back-to-back losses as he takes on The HardCore Gym’s Lawson McClure, another Wild Bill’s veteran.

In the lone women’s fight on the card, Mary Ellen Cano will take on Linda Cunningham at a 122 lb. catch-weight bout as both ladies try to pick up their first professional victories.