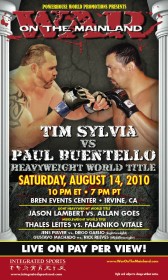 “War on the Mainland,” presented by Powerhouse World Promotions, is being distributed by Integrated Sports Media at 10:00PM ET/7:00PM PT in North America on cable and satellite Pay-Per-View via iN Demand, DIRECTV, Avail-TVN and DISH Network, as well as Viewer’s Choice, Bell TV and Shaw PPV in Canada, for a suggested retail price of only $29.95. It will also be available in the United Kingdom via Primetime Live. The PPV card will also be streamed live on Internet PPV outside of the United States, Canada and United Kingdom by going to www.WarontheMainland.com.

“It’s a great match-up,” Buentello said, “one that fans there in the arena or watching at home will be out of their seats, because they’re going to be on their feet from beginning to end. Because I’m finally fighting Tim makes this fight more interesting. I respect him as a fighter. We were supposed to fight before but it didn’t happen and here it is now. We’re two top heavyweight competitors. Everybody knows what I’m about – my nickname (‘The Headhunter’) says it all.”

The 6’ 2”, 250-pound Buentello, fighting out of Amarillo, Texas, has defeated “Tank” Abbott, Justin Eilers, and Mike Kyle, as well as Gary Goodridge (DEC3) and Kirill “Baby Fedor” Sidelnikov (TKO3) in a pair of high-profile Affliction-promoted shows.

Buentello (27-12-0) has stopped 17 of his 27 victims, while the 6’ 8”, 300-pound Sylvia (26-6-0), fighting out of Bettendorf, Iowa, has also knocked out 17 foes. Tim has defeated many of the world’s top MMA heavyweights and super heavyweights, including Andrei Arlovski (2) Brandon Vera, Jeff Monson, Wes Sims, Ricco Rodriguez, Mike Whitehead (2), Ben Rothwell and Jason Lambert.

“Sylvia versus Buentello; everybody know what it’s all about,” Paul noted. “Neither one of us are submission guys. We’re both big guys who throw big punches. Fans know well in advance that they’re going to get their money’s worth.”

“I switched my training camp to Long Beach (CA) for this fight,” Buentello added. “I’m now training with Antonio McGee. It’s been a great camp so far.”

Vendor opportunities and sponsorships are available by calling 1.858.798.1541.