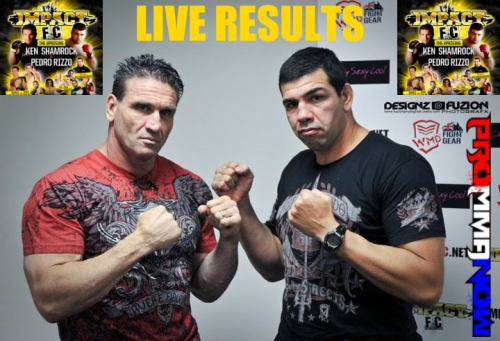 MMA legend and UFC Hall of Famer Ken Shamrock will take on another legend of the sport, Pedro Rizzo, in the main event. Coming off a controversial bout against Josh Koscheck at UFC 113 in May, England’s Paul Daley will take on Daniel Acacio in the co-main event.

Round 2 – Leg kick from Yaylor, he shoots, gets the takedown on the up right Bustamante and ends up in his full guard. Taylor staying active on top, but not active enough as Big John stands them up. Bustamante appears to be having trouble standing and Big John calls the fight for Taylor. Strange ending. Bustamante says he was dizzy. Good call by McCarthy.

(MW) Murilo Rua vs. Jeremy May

Round 1 – May slips to the ground on a head kick attempt but gets back up. He attacks with pucnhes, none land and they clinch. May misses with a head kick, Rua fires a punch, then clinches. May lands a knee, skims Ninja’s head with a high kick, lands a front kick. Body punch twice by Ninja. May drops Ninja with a punch, then jumps on top of him trying to finish. Ninja gets to his feet and gets the clinch. May locks on a chock, lets it go as Rua lands body shots. Nice recovery for Rua who got dropped. Rua gets the takedown. May gives up his back in the turtle position. Rua lands a knee to the ribs. May gets up and Rua picks him up with a big slam. However, May slips out, gets to his feet. They square up again. May with a leg kick. Rua drops down with an arm in guillotine attempt and May taps almost immediately. Good fight.

Round 2 – Nice  uppercut from Kang, then a takedown. Filho gets up, throws a right, then shoots, grabs the single and works Kang to the ground. Filho is on top in half guard. Filho trying to free his leg from Kang’s half guard. McCarthy calls for action to work. Filho lands some elbows and shoulder shots from the top. Filho gets full mount and has an arm triangle it looks like. Kang struggles, kicking his legs. Kang eventually reverses and ends up on top in Filho’s full guard. 1:20 left in the round. Kang postures up, lands a nice right hand, then moves back to half guard. McCarthy calls for action. I give that round to Filho 10-9.

Round 3 – Kang swings, Filho drops levels and gets a double leg takedown. Kang achieves half guard. Filho throwng nice body shots from on top. Kang reverses, takes Filho’s back, has his hooks in. Filho rolls and lands in side control. Some great grappling going on here. Nice hammerfist from Filho. Kang turtles up and Filho takes his back with hooks in. Kang rolls, gets to his feet, lands a knee. Kang shoots, Filho stuffs it and grabs a body lock from the back. Kang rolls into a knee bar. Filho spins out. Kang attacks Filho’s arm with a kimura attempt. Filho is inside Kang’s full guard. This is a close bout. Kang attacks the arm with :45 seconds left. Filho escapes and is still on top in half guard. :10 seconds left. I give the round to Filho 10-9 although I would not argue one bit if it was given to Kang. It’s a toss up and deserves a rematch.

NOTES: They are showing the Carlos Newton vs. Brian Ebersole fight from last week.

NOTES: Fans will remember heavyweight Brad Morris (10-4) from his two UFC bouts in 2008. He lost back to back bouts against Cain Velasquez and Jason Brilz and has not fought since then.  Soa Palelei (10-2) is coming off a win in XFC. He has fought in Pride and fought Eddie Sanchez at UFC 79. Both Morris and Palelei are from Australia. Still waiting on the Newton vs. Ebersole fight to finish.

Round 1 – Some big boys here. they clinch. This is a rematch from a 2002 fight in which Soa Palelei won by doctor stoppage. Morris looks for a takedown, lets it go. Palelei throwing shots from the clinch. Knee to the gut from Palelei, and another, and another. Palelei working on the ribs with punches and then another knee to the gut, another one. Palelei grabs a front head lock and throws more knees. It’s a clinch war. Palelei appears to hurt Morris with multiple knees to the body and then to the head. Palelei takes him down, postures up and stands, moves to side control. Palelei locks up a kimura, cranks it hard and Morris taps out. It was a one-sided beat down.

Round 1 – Let’s see if Daley can keep his cool and not throw any late shots. Brazil vs. England. Big leg kick from Daley. Body punches from Daley, then another leg kick, another one. Daley gets his leg caught and Acacio pushes him against the cage. Daley reverses, gives him a knee. Acacio reverses the clinch, lands a knee. It’s a clinch war at the moment. Big elbow from Daley from the clinch. Daley drops Acacio and follows up with a flurry. Acacio recovers full guard, Daley stands out and up and lets Acacio up. Daley hits him with a couple big punches. Acacio changes levels and takes Daley down with a double leg, beautiful recovery for Acacio. Big elbow for Acacio from half guard. Daley uses the cage to get to his feet. 30 seconds left in the round. Knee from Daley, then misses with a high kick. With 8 seconds remaining, McCarthy calls time to cut some gauze off Acacio’s wrist. Time runs out. I give Daley the round 10-9.

Round 2 – Daley with a spinning backfist misses, lands a body punch. Enormous leg kick from Daley. Acacio grabs a leg mid air and goes for a takedown to heel hook. Daley is free and is in half guard. Big hammerfist from Daley. Acacio goes for a leg lock and Daley is free. Daley lets him up. Enormous leg kick from Daley, and again. Acacio lands one himself. Acacio shoots, tries to pull guard. Daley lets him up. Big leg kick from Daley, Acacio catches it and throws him on his back. Acacio on top in full guard, using hammerfists. Acacio attacking from inside the guard but nothing too damaging but he is staying busy. Daley staying busy on the bottom, attempts an armbar of sorts. I give the round to Daley 10-9.

Round 3 – Daley stalking. Front kick from Acacio, then Daley responds by landing a couple big punches. Acacio falls to his back and Daley jumps in his guard with a big elbow that has opened Acacio’s head. The referee has stopped it from what appears to be a verbal tapout. “He’s got a good one on his head says McCarthy.”

NOTES: Elvis Sinosic did a great job commentating and in his post-fight interviews. Ken Shamrock said after the fight as long as the fans want to see him, he’ll keep fighting. Shamrock was very classy in defeat, but I really can’t say enough about how good Sinosic is on the mic, especially with the interviews.