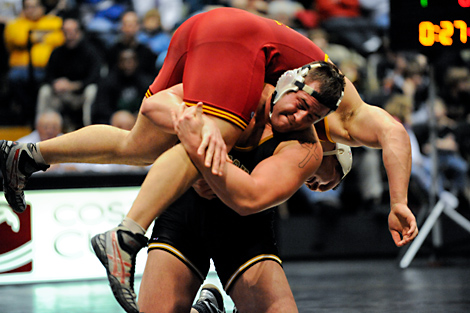 Last weeks news broke that Ellis had been training with UFC heavyweight contender Cain Velasquez for his upcoming bout with Brock Lesnar. Now, MMAweekly is reporting Ellis will begin a fighting career himself.

In 2009, Ellis became Missouri’s second-ever national champion, Ben Askren being the first. He entered the NCAA Division I national tournament as the second seed and won five straight matches to earn the title. In the championship match, he defeated Duke’s Konrad Dudziak with a 3-2 overtime victory.

Ellis spent the fall working with the Tiger’s football team, and did not have nearly as impressive senior wrestling season. He finished the season with a 22-13 record and a sixth place finish at the NCAA tournament. Ellis announced his intentions to pursue a fighting career immediately following the event in an interview with FloWrestling.org.

After College, Ellis once again tried his hand at football. He attended the Cleveland Browns mini-camp before ultimately settling on MMA. Browns head coach, Eric Mangini routinely invites heavyweight wrestlers to summer camps after the success of the Patriots’ Stephen Neal.