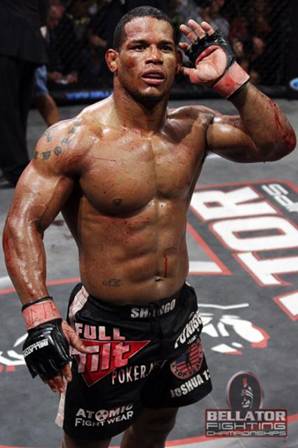 Lombard was last in action at Bellator 18 on May 13th when he thrilled a capacity crowd at the Monroe (La.) Civic Center with a 6-second highlight-reel knockout of UFC veteran Jay Silva, snatching the Bellator record for fastest KO in the process. The dramatic win helped solidify the former Olympic judo competitor’s status as one of the top 185-pounders in the world.

Standing at just 5 feet, 9 inches tall, the chiseled Lombard has finished 16 of his 26 wins by knockout and has never been stopped in 29 career appearances. He is currently scheduled to face Bellator Season 2 Middleweight Champion Alexander “Storm” Shlemenko (30-4) in a highly-anticipated title defense later this fall.

“Hector Lombard is at the top of his game and one of the best middleweights in the world. There are very few fighters out there who want to fight him right now,” said Bellator founder and CEO Bjorn Rebney. “But Whisper Goodman is hungry for the challenge and he’s been through the battles both in the NFL and in MMA. I’m looking forward to watching how he matches up with Hector.”

Goodman, who was born and raised in South Florida, has notable pro wins over “The Ultimate Fighter 7” veteran Dante Rivera and UFC standout Jordan Radev. He has a reputation as a no-nonsense fighter, having finished 13 of his 15 victories decisively via KO or TKO.

Admittedly excited about returning to fight Lombard in front of a hometown crowd, Goodman says he isn’t intimidated by his hulking opponent.

“I know he’s tough and I know he’s the Bellator champion, but I’ll fight anyone,” Goodman said. “This is a great opportunity for me so I’m just going to apply my game plan and take what he gives me.”

Lombard, for his part, said he is looking forward to another fight in his adopted home state of Florida, where he currently trains as a member of American Top Team.

“I’m looking forward to fighting in my home town, South Florida, where all my fans can come and watch,” Lombard said.  “I appreciate the opportunity the Seminole Tribe and Bellator have given me. Herbert Goodman is a great athlete and will be a good opponent and it will be a great fight.”

Tickets for the event are on sale NOW at www.Ticketmaster.com.