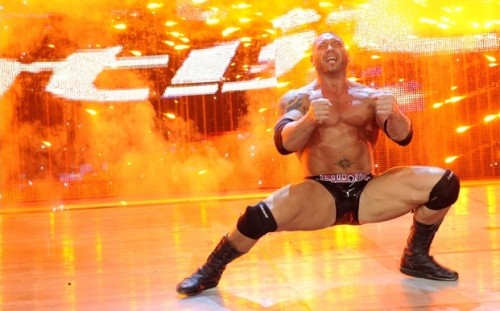 Although former WWE heavyweight champion Batista told TMZ reporters this weekend that he would be fighting for Strikeforce and already knows his first opponent, Strikeforce officials have denied any contract has been signed.

He was seen talking with Strikeforce CEO Scott Coker at the post-fight press conference Wednesday night in Los Angeles, and there are rumors the San Jose-based promotion may offer him a deal.

Apparently Batista is training at the Affliction gym and does have an offer to fight for another smaller MMA promotion. Those close to him have indicated his main focus is acting, not fighting.

A report on D-Batista.com reads:

Apparently Batista has been approached with an offer by a non-major MMA group. Word is that it’s a big money offer and is for two fights, likely pay-per-view events and the first opponent would be a well-known former headliner. This is the same offer that Batista hinted around about when he was leaving WWE.