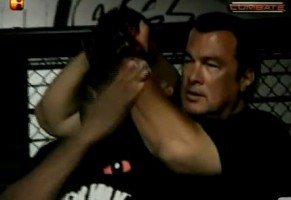 If Silva does utilize some of these moves in his fight with upcoming opponent Chael Sonnen, the former political aspirant is in for a bad night. For instance, the double palm strike to the face he uses at the 6:28 mark as the opponent shoots in, could do some serious damage.

Silva likes to use unorthodox techniques and strikes, and many of these Aikido moves are right up his alley. Don’t be surprised if Silva lands a big chop to the neck or some sort of joint manipulation against Sonnen.

When asked what Sonnen has to offer against Silva, Seagal simply answers, “Nothing.” While realizing Sonnen’s skill as a wrestler, Segal feels Silva has beaten much stiffer competition. “I do not believe this will be one of his [Silva’s] more difficult fights… I think he is a much better fighter,” said the martial arts movie legend.

Chael Sonnen will challenge Anderson Silva for the UFC middleweight title on Aug. 7 at UFC 117 in Oakland, Calif.