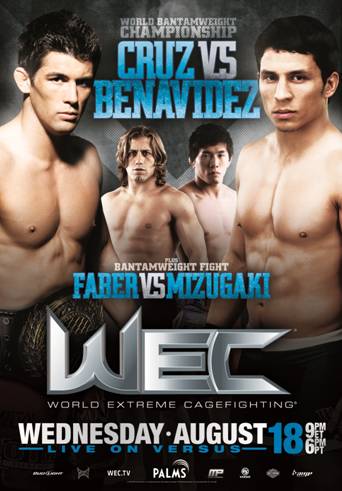 LAS VEGAS, Nev. — On Aug. 18, 2010, World Extreme Cagefighting top bantamweight contender Joseph Benavidez (12-1) will get his shot at redemption against the only man to beat him inside the cage, WEC bantamweight champ Dominick Cruz (15-1).

The two first met at WEC 42 in Aug. 2009, battled for three rounds, won “Fight of the Night” honors, and Cruz walked away with the unanimous decision victory.

At WEC 50, Benavidez will get another shot Cruz, only this time the stakes are much higher. Cruz is now the proud and deserving owner of the WEC Bantamweight Title, which he gained by stopping Brian Bowles (8-1) at WEC 47 back in March.

As if the WEC bantamweight division were not already stacked enough, former WEC featherweight champ Urijah Faber (23-4) is throwing his hat in the mix, possibly because he is the only person who holds a win thus far over current 135 lb. champion Dominick Cruz.

Faber will make his bantamweight debut against Japan’s Takeya Mizugaki (13-4-2), who is coming off a unanimous decision win over Rani Yahya in April.

WEC 50 will take place Wednesday, Aug. 18, at the Pearl at the Palms Casino Resort in Las Vegas, Nev., and will air live on Versus. Other bouts expected to take place on this card include Anthony Pettis vs. Shane Roller and Bart Palaszewski vs. Zachary Micklewright.