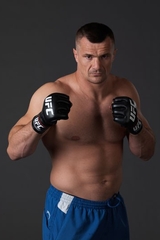 Cro Cop is known as one of the most devastating and respected strikers in the history of the sport. His only other “real” submission victory came in a 2004 Pride fight against Kevin Randleman, when he submitted the wrestler with a guillotine choke.

This was the last fight on Cro Cop’s UFC contract, and while UFC President Dana White was pleased with the Croatian’s performance and seemed optimistic about Cro Cop finishing out his career with the Ultimate Fighting Championship, it could be that the win over Barry was that finish.

“I just did my favorite performance of his career. I think it was my last entry in Oktogon. This year I will perform more safely, and will likely to turn in my final farewell to martial arts – said the 36-year-old Mirko Filipovic for the morning newspaper a few minutes of the vibrant Vancouver victory, adding:

Dana White says the UFC is ready for a new round of talks, but mentally I was saturated with sports. I have no motive and I wished to civilian life.”

Fighters Only Magazine also has a report on this with a clearer translation. They also have an interesting article about Canadian immigration authorities detaining and questioning Cro Cop about his military service and possible war crimes during his entry to the country.