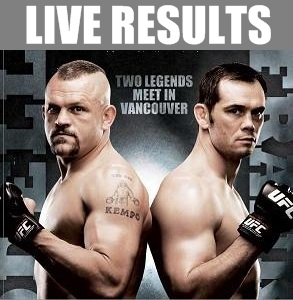 Round 1 – Here we go cowboys. Danzig catches a body kick and puts Wiman down. Wiman grabbed a leg but Danzig escapes and is working from in the guard. Wiman with his back against the cage, turns, tries to lock in a guillotine. He locks it on but Danzig looks okay. The ref Yves Lavigne stopped to the fight thinking he was out. Terrible call and controversy. Danzig was very respectful after the fight.

Round 1 – Leg kick by Griffin. Leg kick by Griffin again. Dunham shoots, gets a leg but can not get Griffin down even though he carries him all around the Octagon. Griffin lands a nice right. That was nut! Griffin lands a right. Leg kick Griffin, and another one, big one. Nice right by Griffin, then another big leg kick. Dunham lands a combination. Leg kick then a right hand by Griffin. Griffin lands two more leg kicks. Dunham gets Griffin down, takes his back, with both hooks in. One minute left in the round. Griffin throwing blind punches, and Dunham can not advance with the submission. Damn close round, I’m leaning toward Griffin 10-9.

Round 2 – Randy Couture is in Griffin’s corner, giving him advice between rounds. Dunham lands a counter right hook. Griffin swings, Dunham ducks, shoots, and Griffin locks on a guillotine. Dunham frees his head and is on top in half guard. Griffin is back up, lands a leg kick, then a right hand, another leg kick. They both swing and Dunham gets another takedown. Griffin looking for a kimura but Dunham escapes and takes Griffin’s back once again. 1:30 left in the round. Griffin rolls, stands up with Dunham still on his back. Griffin walks over to the cage and Dunham is still trying to get the choke. Griffin dives into the mat head first and Dunham’s head hits the mat but he’s still on there. I give the roudn 10-9 to Dunham.

Round 3 – Leg kick by Griffin, and another. Big overhand right by Griffin connects. Griffin shoots, gets a single, lets it go. Dunham gets underhooks and lands a knee on the break. They exchange punches. Beautiful body kick knocks Griffin off balance and Dunham immediately jumps on his back. For the third round in a row Dunham has his back on the ground with both hooks in. Dunham maintaining great back control with those hooks. Griffin stands up again with Dunham on his back. He walks over to the cage again. Will he try to spike him again? Only 30 seconds left in the round. I can’t believe I hear a few boos. Griffin jumps to the ground but can not get Dunham off. Beautiful performance by Evan Dunham against a veteran.

NOTE: One judge actually gave the fight to Griffin. WTF? That judge should be fired.

NOTES:  At 20 years-old, MacDonald is the youngest fighter in the UFC at the moment. MacDonald is from Canada, so he has the home field advantage here, and will look to keep his undefeated record in tact. This is a big step up for MacDonald. If he can defeat Condit, this kid is legit.

Round 1 – MacDonald catches Condit’s kick and slings him to the ground, tells Condit to get up. Rory ties him up and slams Condit. Condit has full guard. Condit being active from his back, pulls mission control and throws several punches and elbows from his back. Rory lets him up. Straight left from Condit and Condit lands a big right hand. Big leg kick by Condit and Rory lands a right. Rory ties him up and slams him again. The crowd chants “Rory, Rory!” Rory stands up, lets condit up. Rory puts pressure on Condit, they tie up briefly. Rory goes back to putting on the pressure. Big leg kick by Condit, and again. Rory catches a leg, eats an uppercut. Nice leg kick by Condit and rory follows suit, then gets the takedown. Great round for MacDonald. I give him the round 10-9.

Round 2 – Rory’s composure is very impressive for such a young fighter. NIce straight punch from Rory on the chin of Condit. Condit lands a leg kick. Condit tried for a takedown but Rory ends up on top in side control. Rory stands up, Condit is up. They tie up and exchange. Rory lands a left, and another left. Leg kick by Condit, then a push kick. Condit was on top of Rory but got tripped and Rory ends up in his gull guard. Rory stands up, Condit is up. Rory lands a straight left. Rory lands a nice punch combo. Condit with a leg kick. Condit shoots, gets stuffed. Big leg kick from Condit. They exchange punches. Condit with  a right hand and a leg kick.  Front kick to the face by Condit but falls on his butt. Close round but I give it to Rory 10-9.

Round 3 – Leg kick Condit. Rory lands a nice left to the chin. Condit ends up on top of Rory in half guard. Nice elbow from Condit and Rory’s face is cut open. Condit gets full mount, Rory gets half guard. Condit stands up and comes back in swinging. Rory makes his way up. Rory goes for a takedown but Condit puts him on his back and starts landing shots. Rory’s right eye is messed up pretty badly. Rogan says it looks like a broken orbital. Condit keeps on the pressure, lands a big elbow. 1:00 left in the fight. Condit stands up, throws punches, goes back to half guard and lays on the assault, with ten seconds left the referee stops the fight. the crowd boos but Rory MacDonald is hurt and he’s Canadian. Great showing from Rory. The crowd chants “bullshit”. He is Canadian after all. Rory MacDonald says he felt it was a just stoppage. He also told the crowd not to boo Carlos.

Round 1 – Someone stole Rothwell’s hat on the way to the cage. For some reason Rothwell looks constipated. Yves Lavigne gets booed due to his earlier terrible stoppage. Big right hand by Rothwell right away. Yvel swings big, misses, goes for a guilltone. Rothwell is free and on top in side control. Rothwell gets full mount but Yvel reverses. They both stand up and Rothwell slams Yvel on his back as Yvel tried to lock up a guillotine again. Rothwell passes to side control right away. Rothwell moves knee to belly, back to side control. Rothwell tries to get the crucifix but Yvel busts out. Rothwell gets full mount with Yvel squashed against the cage. Yvel trying to buck out. Yvel goes for a leg lock but Rothwell is out and back to side control. Rothwell gets the crucifix from the mount. Yvel tries to roll and gets it the second time. Yvel lands a big knee on the way up. Yvel lands a couple of big punches. Knee to the body by Rothwell. Rothwell and Yvel tie up and rest. Two knees land for Rothwell before the bell. I give that round to Rothwell 10-9.

Round 2 – Leg kick Kampmann. And again. Thiago swings huge, hits air. Leg kick from Thiago. They tie up, Kampmann lands a right. Thiago swings big and misses. Thiago dives for Kampmann’s legs, Kampmann moves out of the way and takes his back. Thiago has a kimura attempt. Kampmann is holding on. Thiago sweeps his opponent, ends up in side control.  Kampmann gets up, throws a knee and gets the takedown as the bell sounds. I give the round to Kampmann 10-9.

Round 3 – Thiago’s right eye is busted up underneath it. Thiago swings big and misses. Kampmann gets a body lock and puts Thiago on his back. Kampmann takes Thiago’s back. Thiago dumps him and goes after Kampmann’s leg. Kampmann scrambles, lands a knee to the body. 1:30 left in the fight. They stand up and square off. Overhand right by Thiago is deflected and Kampmann puts him on his back. Thiago scrambles. Kampmann locks on an arm triangle with ten seconds left. Kampmann gets the round 10-9 and the fight 30-27 as I see it.

Round 2 – Head kick blocked by Barry, again. Body kick Cro Cop. Cro Cop attacks with a flurry of punches. Barry with a leg kick. Side kick misses for Cro Cop. Leg kick Barry. They tie up. Cro Cop punches his thighs. Barry tries to trip him but can’t. Ref separates them. Side kick Cro Cop. Head kick misses for Barry and Cro Cop locks on a guillotine, he puts Barry on his back and is in half guard. Cro Cop pounding his sides and takes full mount. Cro Cop is up high but has his hooks in. Cro Cop looking for the rear-naked choke, only ten seconds left in the round. Cro Cop wins the round 10-9.

Round 3 – Barry breathing harder than Cro Cop. Head kick by Cro Cop barely blocked. Axe kick lands for Cro Cop. Cro Cop locks him up with a body lock. Head kick by Cro Cop and Barry drops him with a sweep on the back leg. Leg kick Barry. Jab from Cro Cop. Leg kick Barry. Nice left hook from Barry. Right hand from Cro Cop. Barry has slowed. Dirty boxing from Cro Cop. 1:30 left in the fight. Ref separates it. Cro Cop lands several punches, drops Barry. Barry holds on to Cro Cop and Cro Coop lands about 20 short rabbit punches. Elbow from Cro Cop/ Mirko locks on a rear naked choke and Barry taps out. There was only about 30 seconds left in the round when Cro Cop jumped on his back and subbed him, I don’t even think he had hooks in. No, he didn’t. Wow. Good win for Cro Cop and Barry is probably happy to lose to Cro Cop if I had to guess.

NOTE: Cro Cop says after the fight, “I hope Mr. Dana White is not stingy and gives me submission of the night as well as fight of the night.”

Round 1 – I just can’t see this fight going the distance. Chuck looks VERY ready. I can’t believe we get to see this. Leg kick by Franklin. Leg kick by Chuck. Left hand by Rich. Big leg kick by Chuck. Rich tries for the takedown, Chuck stuffs it. Body kick by Chuck. Leg kick from Rich. Right hand by Rich. Uppercut from Chuck. Chuck gets a beautiful takedown. Rich uses butterfly guard. Rich is uup and Chuck is cut somehow over his eye. Leg kick from Chuck. The cut may have come from a head collision on the takedown. Franklin lands a left. Leg kick from Rich but Chuck lands a punch. This is fun. Head kick from Chuck. Chuck rushes in and Rich Franklin puts him to sleep with a huge right hand. Chuck is out cold and that is it man that is it. Chuck landed and elbow then Rich countered with a big right that Chuck ran into it. Very sad to see in my opinion. Chuck is awake. Rich said his arm broke early in the round when he blocked Chuck’s kick.

One thought on “UFC 115 results and play-by-play”