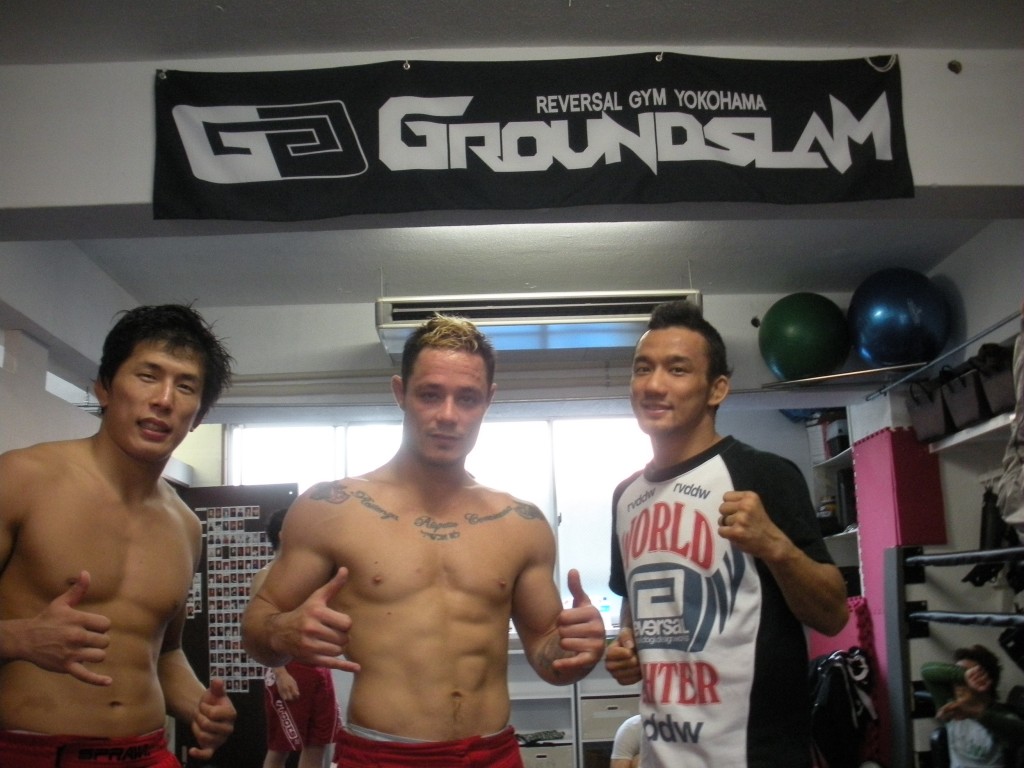 Today was rough. We woke up at 6:30 in order to be at the train by 7, and in Yokohama for training at 9 (mind you we got bed last night around 2). Today We traveled to Train with Shooto 135 pound Champion Shu Katsumura (Famous Ninja choke) and WEC fighter Takeya Mizugaki.

Once we arrived in Yokohama, it was rush hour at the train station. Floods and Floods of people were running and pouring from every direction you looked. It was insanity. Even on the train, people were crammed together like sardines. Luckily we only had to be in the madness for a few minutes.
Outside of the train station it was immediately calm. Almost fitting was the saying “calm before the storm,” which is exactly what it was when we arrived at the Ground Slam Gym.
Training was great!  We MMA sparred for 1 hour straight, bell to bell. The session was short but aggressive and to the point. Each round was with a new guy and everyone out of this gym were beasts. When me and Katsumura went at it everyone stopped to watch. We went back and forth until I landed a deep takedown. Unfortunately it was not a great idea. From the ground he worked and worked for his famous set up, and eventually caught me in his “Ninja Choke”. Man that thing is nasty. The setup for it was amazing and so fast.
After training, we all took a bunch of photos, and then Taiki and I headed back to Odawara for lunch and some rest before our evening training along with Ruminas celebration party.  I took about a 2 hour nap at Roots gym and then went for a massage before Ruminas MMA class at 7 (My body is already beat up). We did a bunch of crazy warm up exercises and then it was into technique for about 90 minutes. Rumina had me teach a part of it.

After the class it was sparring time. The amateur and pro fighters always get together for some sort of sparring after the technique classes. Tonight we grappled for 90 mins then hit the showers and headed to Ruminas party.
We met Rumina and a bunch of his students and friends at the 1st spot for dinner and a few drinks. Sashimi, Kabobs, Tempura. It was delicious. After dinner it was off to the 2nd spot for more drinks (I rarely drink so you can say the American was a little drunk). The group reduced in size by about half as we approached the 2nd restaurant and it was already about midnight. Everyone was having a great time. Laughing, joking; drinks were passed around and passed around until it was about 2am.

I think most of the night was spent with us teaching each other horrible slang, in both English and Japanese. Needless to say, we were all pretty smashed by the time we left. On the way home we left as a group and someone suggested a light snack. So we stopped at this rice beef bowl place that was open all night. Yes, that meant more drinking. I think we finally left around 4 and made it home about 4:30. I was super tired and needed to sleep. The good news is, I think I might have drank my jet lag away!

(Sorry my camera died at ROOTS gym so unfortunately I only got a few photos from the party on my phone. I will upload them later today).