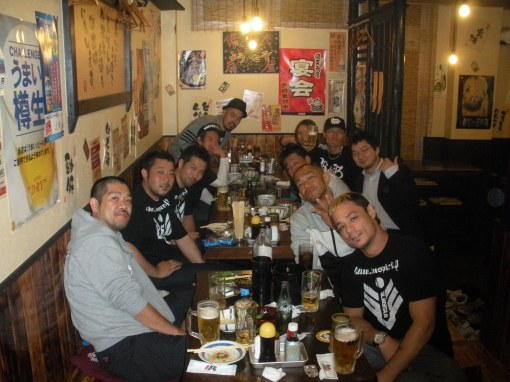 Sorry for the delay in the blog.  The days have been running so close together. But here we go….

Today was Rumina’s big fight against Shooto icon 18-1 Ryoto Matsune. Taiki and myself met Rumina at Roots gym and then left Odawara around 11am heading to the Arena in Tokyo. On the way Rumina wanted to eat lunch, so we stopped at this really cool market/food stop off the freeway and ate some Udon and Octopus (like a rest stop but very high class..it was so cool).

After lunch it was a 90 minute straight shot to the JBC Hall Arena.  Once we arrived at the arena, Rumina was swarmed with fans wanting photos and autographs. I tried to focus on Rumina but the Arena was so overwhelming. Roller Coasters, rides, thousands of people in costume (There was some kind of event going on that had to do with famous Japanese characters). That really had me pulling in different directions. But once inside the arena it was a different story. We took Rumina backstage and chilled out until it was time to get warmed up for the fight. It was amazing having so much talent in our locker room. We had the current 145 pound champ Lion Takeshi (who was defending his title this night), Shooto 135 pound champion Shu Katsumura, X champion Mamoru Yamaguchi and Champion Taiki Tsuchiya all in Rumina’s room.

I felt honored being allowed in his locker room with his team. Rumina wrapped his hands, warmed up and now it was time to fight. I couldn’t believe how relaxed Rumina was through the whole process. He looked as if he was just going for coffee through the entire thing. It was amazing to watch how comfortable he is in the element of fight. As we walked Rumina down to the tunnel you heard nothing but the screams of the 4-5000 fans in the audience. “RUMINA..RUMINA..RUMINA!!” Once the fight started the crowd went silent. The only time they made a noise was when a punch landed or a defense from a takedown.

I love how educated the Japanese fans are. The 1st round saw much of a feeling out period between the two veterans. The second round was a different story. Matsune attacked to the body and Rumina landed a beautiful knee to the chin knocking him out cold. Just for good measure Rumina followed up with 2 solid shots before the ref could pull him off. The crowd went nuts as did we in his corner. It was a huge victory for Rumina and I couldn’t be more proud to be a part of it.

After Rumina’s fight, gym mate and Champion Lion Takeshi was ready to go. The fight was a back a forth slug fest. It was by far one of the best fights I’ve seen to date. Both men put there entire hearts on the line. Unfortunatly, Lion ended up dropping a decision loss to the new champion Hioki.
Once the event was over, we drove 2 hours back to Odawara and had mini celebration dinner with Rumina and some of the ROOTS gym members. The actually party will be tomorrow.
Tonight was an amazing night of fights and an experience I will not forget. But for now, its time to go to bed as we have to wake up at 6:30am to travel to Yokohama’s ground slam gym for training at 10am with Shooto Champion Shu Katsumura and WEC fighter Takeya Mizugaki.