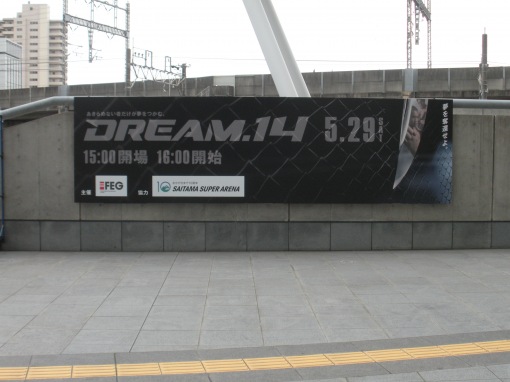 Today we woke around 8:30 so we could get to ROOTS gym by 9 for sprint day. Every Saturday and Wednesday the fighters do this run. It’s basically a 5 mile jog with stair sprints in the middle (Stair way was 5 sets of stairs ran 5x), followed by push ups at the top. When we jogged back to the gym it was time for more push up and pull ups. My legs were shot but I still felt really good. After training I had to rush into a shower and then it was off to watch DREAM!

We started off with a short train ride and then were picked up by another gym mate for the remainder of the 2 hour travel to the arena.
Once at the venue we met up with one of my sponsors from INSPIRIT (Hata) and went into the show. The event was amazing. Fireworks, lights, fire, it was insane. The crowed was unbelievably educated and I only heard 1 boo the entire night. Of course it was from an American yelling “Cmon fight!! BOOO BOOO…DO SOMETHING…” I wanted to go over and choke the shit out of him.

Aside from the production of the show, the fights were awesome. Some brutal KO’s, slick submissions and overall great fights. I think the strangest part of the night was when we were leaving somehow someone knew who I was and asked for an autograph and then also ended up doing an interview with a camera man from DREAM. Kinda cool.

After the fights it was back on the train and back to Odawara. We were a little hungry so we went and ate Soba at the same restaurant as the other night. This time the chef came out and gave me a Japanese Soba chefs outfit!! So cool.