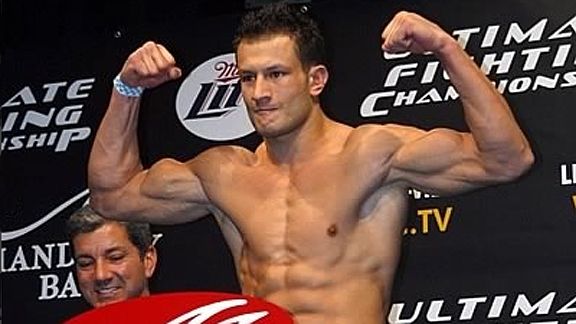 The BBC has reported that former UFC middleweight Lee Murray has been sentenced to his role in a bank raid that took place in Kent back in 2006.

Lee Murray, 30, originally from south London, was named during the trial of other gang members as the “mastermind” of the £53m raid in Kent in 2006.

Kent Police said Murray must serve 10 years in jail in Morocco for his involvement.

A spokesman for the force said Murray was deemed to be Moroccan and could not be extradited to the UK.
‘Held at gunpoint’

Det Supt Mick Judge said the Kent force had worked with the Moroccan authorities to ensure Murray was prosecuted.

He said: “I’m pleased Murray will now begin serving a significant prison sentence for his part in the Tonbridge robbery.”

Depot manager Colin Dixon and family were kidnapped at gunpoint by men posing as police officers to allow the gang to gain entry.

He said Murray played a key role in the conspiracy to kidnap the Dixons and rob the depot.

Lee Murray’s solicitor Abdellah Benlanhidi said the verdict was too harsh and they would appeal against it. He said Murray had been in jail for four years, which meant he had another six years to serve.

Murray fought once for the UFC back at UFC 46. On that night, he defeated Jorge Rivera by triangle choke. In his next fight, he pushed current UFC middleweight champion Anderson Silva to a contentious decision, but ultimately lost the fight. Murray also holds a victory over Pride FC veteran Jose Landi-Jons