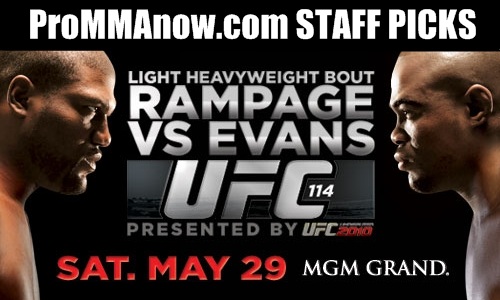 LAS VEGAS, Nev. – “UFC 114: Rampage vs. Evans” takes place Saturday night at the MGM Grand in Las Vegas, Nev. Headlining the show of course is a bout that has been a long time coming. From the time they were coaches on season ten of “The Ultimate Fighter” last year until this very day, Rashad Evans and Quinton Jackson have made no bones about the fact they can not stand each other. It may very well be the most heated rivalry in the history of the UFC, and this Saturday night, these men are finally going to get to settle it inside the Octagon. And the best part about it is, nobody goes to jail, and we as fans get to watch.

The ProMMAnow.com staff has come together once again to give their predictions on “Rampage vs. Evans” and the other UFC 114 bouts which will air live on Pay-Per-View, Saturday, May 29, beginning at 10:00 p.m. ET/7:00 p.m. PT. ProMMAnow.com will also, as is the custom, be posting live results and play-by-play commentary of all the UFC 114 action.

Check out our predictions and then share your thoughts with us by leaving a comment. Let us know your own predictions, who you think will win or lose, and which one of us is on the money with our picks and who is completely off their rocker.

BRIAN FURBY: I think this is probably the hardest fight I’ve had to pick in a while. I’ve bounced back and forth between each fighter’s ability to KO as well as the fact that they have both suffered at least one devastating KO themselves. Both fighters have engaged in a substantial amount of pre-fight crap talking, and the recent telephone conference about the event was some of the funniest stuff I’ve heard in a while. All that being said, Rampage’s power outclasses Rashad’s, but Rashad’s technique is heads and tails above Rampage. Rampage has some hellacious slams but Rashad has better wrestling. Rampage seems to have gotten his act together in terms of a training camp, but Rashad trains with one of the greatest trainers that MMA will ever see. I’d like to see Rampage pull out a big KO win, but I just don’t see it happening. Rashad will come in with a better gameplan and will be more effective at putting it to use. Rashad Evans wins by unanimous decision.

RICHARD MANN: Honestly, “Rampage” should be the better fighter. Unlike most strikers in MMA, he is able to counter and parry strikes and land his own. However, anyone who has followed MMA over the years knows what an undisciplined and unmotivated “Rampage” looks like. He has made it pretty clear he is not overjoyed about fighting, and that will hurt him in this fight. Evans should be able to win if he stays on the outside and uses his wrestling. Despite a solid wrestling game he often stays with a double leg when an easy single leg is available. After watching the tape of his last fight, it appears as if he is working to correct this problem. Evans by decision.

JACK BRATCHER: King Mo has been training with Rashad for this fight, so that tells me he plans to use his wrestling when the opportunity presents itself. From listening to Rashad it sounds like he wants to use all his tools to beat Rampage everywhere; strike when he expects a takedown and takedown when he’s looking for the strikes. Rampage says he’s brought in some Iranian wrestlers to help him prepare, whatever that’s worth. This is Rashad’s fight to win. Like Furby and Richard, I think Evans will get the decision victory. Rampage could possibly KO Evans but I think Evans will use his footwork and speed to avoid  the KO shot from Rampage. Rampage has said he is going back to using more kicks and knees so that could be an X-factor here, but I doubt it. He’s looked the same for quite some time now, and has relegated himself pretty much to just boxing. Evans by decision.

BRIAN FURBY: I can’t stand Bisping. If you look in the dictionary under the definition of “asshat” you will find his picture – and in case you’re wondering, in the picture, he’s doing the Shooter Gavin double-gun point, wearing an Ed Hardy t-shirt. However, I do recognize that Bisping is a decent fighter. But, due to his “asshat-ery”, I will never pick him to win a fight. Never. Pick any MMA fighter, any weight, any record, and I will give you some justification (however illogical) why that fighter will beat Bisping. But unfortunately for you Bisping fans out there, this explanation is not illogical. Dan Miller, coming off two losses, is hungrier than Bisping, and he knows that a win over Bisping will get him working his way back up the middleweight ladder. Besides, those two losses, in case you forgot, were decision losses to Chael Sonnen and Demian Maia. If those guys couldn’t finish Miller, neither will Bisping. Miller has solid hands, is better on the ground than Bisping, and is much more motivated. Dan Miller wins by unanimous decision.

RICHARD MANN: Normally, I would say that a wrestler the caliber of Dan Miller would have little trouble dealing with Michael Bisping. In this case I am forced to sing a different tune. Miller has basically refused to take down his last few opponents and paid for it. If Demian Maia can out-strike Miller, than Bisping should have very little trouble doing the same. Bisping by decision.

JACK BRATCHER: Miller lost a daughter last year and his son is very sick at the moment. I was going to pick him to win until I saw a recent interview with him where he did not seem like someone who was ready for this. Bisping said when he talked to him he seemed very timid and thinks he is already “mentally defeated”. On the other hand Bisping seems extremely confident and from what I’ve heard he’s looked really good in training. Miller’s never been finished, and I don’t think Bisping will finish him but I do think he will out-point him and take it to a decision victory.

BRIAN FURBY: Fresh off a TKO victory of Luis Cane, Nogueira is going to add another TKO victory to his record with this win over Brilz. Brilz isn’t a bad fighter (only 2 losses in 21 fights), but this step up in competition will be too much for him. Nogueira wins by TKO in Round 1.

RICHARD MANN: Brilz probably deserved to beat Eliot Marshall back at UFC 103. With that victory, he would have a perfect 4-0 record in the Octagon. However, as a late replacement, he really does not have very much chance against Lil Nog. Expect Brilz to use his takedowns to make the fight closer than expected, but eventually Nogueira will land punches on the feet and end the fight. Nogueira by TKO.

JACK BRATCHER: Actually Nogueira and Brilz’s records are very similar and they’ve both been fighting for about the same length of time. The major difference of course has been their level of competition.This is Brilz’s fifth fight inside the Octagon. It’s rumored a lot of guys turned this fight down against “Little Nog” when Forrest pulled out, but Brilz stepped up on about four weeks notice. He’s the kind of guy that is always training so he was in shape, so I don’t think the short notice is going to affect him terribly. If there is a style match-up that is bad for Nogueira, it is Brilz’s wrestling and ground and pound style. It’s the biggest fight of Brilz’s life and I’m going out on a limb here and pick the underdog, Brilz by decision. Now go watch/listen to my UFC 114 interview with Jason Brilz if you haven’t already.

BRIAN FURBY: All the people that are jumping on the “Todd Duffee is overhyped” bandwagon are going to feel pretty stupid after this fight. Sure, Russow’s a tough guy, but Duffee is a powerhouse and he’ll take it to Russow early. Probably not in seven seconds, but Russow won’t make it out of the first round. Duffee wins by TKO in Round 1.

RICHARD MANN: Mike Russow deserves a lot of sympathy. Not only did he have to wait way too long for the UFC shot, but also people are always spelling his last name “Russo,” which is just plain wrong. Duffee is in line for another victory here. The best part of Russow’s game is his ability to work on top; however, he is not the best wrestler. On the feet, Duffee should be patient and wait for the big shot. Duffee by decision.

JACK BRATCHER: Six wins, six knockouts; that’s Todd Duffee. Russow is mostly a submission guy but I don’t see him being able to submit Duffee. Look for another Duffee TKO, probably about the second round.

BRIAN FURBY: In Sanchez’s first return since getting an in-cage lobotomy from BJ Penn, he runs into the undefeated John Hathaway. Sanchez is a huge favorite in the odds for this fight, but I’ll tell you the three reasons I’m not picking him. 1) Hathaway is a solid fighter and he’s going to give Sanchez a run for his money. 2) I love a good underdog story. 3) Want to take a guess the one word I’d pick to describe Sanchez? You guessed it – asshat. In the upcoming sitcom “The Adventures of the Asshat Brothers”, take a guess who is going to play Michael Bisping’s adopted brother. You guessed it – Diego Sanchez. The show won’t be critically acclaimed, but the fans will love it because Diego will answer every one of Bisping’s questions by screaming “YES!” no less than 17 times. Not unlike with Bisping, I will never pick Sanchez to win a fight. Picking Hathaway here may be a tad more illogical than picking Miller to beat Bisping, but Hathaway has picked up three straight wins in the UFC and he knows what a win over Sanchez would do for him, and he’ll be ready for it. John Hathaway wins via unanimous decision.

RICHARD MANN: John Hathaway has looked rather impressive in the UFC so far. However, I do not see the fight going any other way than takedown by Diego and ground and pound by Diego. Also, even if the fight stays on the feet for an extended period of time, Diego’s stand up game has been slowly improving over time. Sanchez by submission.

JACK BRATCHER: Hathaway is undefeated and has a lot of momentum but he hasn’t fought anyone like Sanchez. Anyone who can out-pace Clay Guida is somebody, who unless you have faced them, you’re not going to be able to prepare for. Furby’s just biased so don’t be fooled by his pick. He wouldn’t pick Sanchez if he was fighting Arianny, and because he’s a lawyer he would find a way to make his point. Sanchez via first round submission.