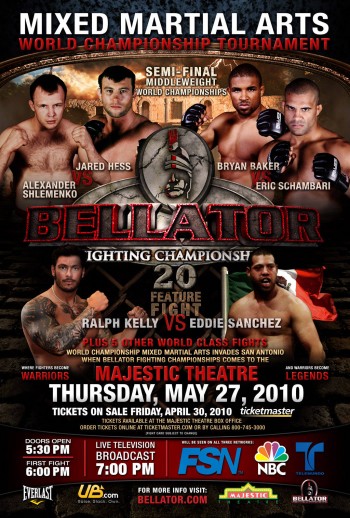 SAN ANTONIO, Texas – Bellator 20 takes place tonight at the Majestic Theatre in downtown San Antonio, Texas. The main card is supposed to air live on FOX Sports Net beginning at 7:00 p.m. CT, although baseball is showing in some markets.

Round 1 -Leg kick by Sursa, Sanchez ties him up and they go to the ground with Sursa on top inside full guard. Sursa lands a few shots from in the guard and Sanchez stands up with his back to the fence. Sursa has underhooks, lands a knee.  Sanchez fires off some punches and Sursa shoots, gets the takedown but Sanchez pops right up. Sanchez clinches puts Sursa against the fence. It’s dirty boxing and knees right now from the clinch game. Sanchez lands some more punches and Sursa shoots again, gets the takedown. Sursa gets full mount and Sanchez scoots his back to the fence. Sursa lands some big shots and a knee to the gut as Sanchez stands up. Sanchez gets the takedown, uses ground and pound, with :45 left seconds in the round. Sanchez moves to side control. Sanchez lands some elbows and punches but Sursa defends well.

Round 2 – Sursa drops Sanchez with a big right. He jumps on Sanchez and unleashes a barrage of hammerfists and punches. Sanchez defends as best as he can but Sursa is landing some big shots. Sursa locks up a guillotine but Sanchez pulls his head free and now has the advantage on top inside Sursa’s full guard. Sursa almost ended it there. Sanchez continues the ground and pound and gets the mount. Sursa gives up his back and looks exhausted. He rolls back over, then turns to his side. Sanchez continues the assault but his punches have slowed. Sursa covers his face. :20 seconds left in the round. Sanchez pounds away until the end of the bell.

Round 3 – Big body shot by Sanchez and Sursa goes down. Sanchez gets the full mount right away and starts blasting. The referee has seen enough of this beating and stops the fight. It was a great come back for Sanchez, he made the right adjustments and did what he had to do.

Round 1 – Leg kick Shlemenko. Hess shoots, eats a knee, and gets a double-leg takedown. Hess in side control, starts landing some punches. Shlemenko gives up his back and Hess briefly has a Twister, and now has Shlemenko’s back landing shots. Shlemenko’s Achilles’ heel is definitely the ground game. Hess has hooks in and locks on the choke, he lets it go. Shlemenko turtles and stands up. Hess has him clinched around the body, knees his thighs. Hess drops for a single leg and gets him back to the ground. Hess tries to take his back but gets to high and falls off. Shlemenko gets up throws a couple of spinning strikes, misses, and gets put back down. Hess finishes the round poundind from Shlemenko’s back. I give the round to Hess 10-9.

Round 2 – Hess goes for the takedown, Shlemenko goes for a guillotine but can’t hold it. Hess lands a nice right from inside the guard. Hess headbutt’s Shlemenko’s belly (it looked like it anyway). Hess lands a nice left, still in the guard. Hess continues the ground and pound. Shlemenko locks in a triangle, very tight. Hess turns north/south and escapes, takes Shlemenko’s back. Hess attempts a rear choke but can’t get it. Shlemenko locks on a heel hook but can’t get it. Hess back inside the guard. The round remains with Hess on top. Second round I give to Hess 10-9.

Round 3 – Shlemenko throws a couple strikes but gets taken down again. He gets up quickly. Shlemenko lands a big knee to the face as Hess shoots. It was big, almost looked like Hess was out. Shlemenko tries to finish and ends up inside Hess’s guard. Hess looks like he has recovered and is throwing punches from his back. Shlemenko stands up and Hess has so much trouble getting to his feet the referee stops it. Doctor says he has dislocated his knee. “Oh my god,” said the commentator as we see the knee cap slide all over the place. A stretcher is brought in for Hess to leave. During the replay Hess’s kneed looked horrible. Shlemenko moves on to the middleweight finals.

Notes: Schambari’s only MMA loss was against Bryan Baker two-and-a-half years ago. It was a split decision loss that Schambari thinks he won. Baker has only one loss too. His loss came against Chael Sonnen via decision.

Round 1 – Baker circling the outside. He lands a short uppercut. Baker lands a one two.  A big overhand right by Schambari, then he shoots for a single leg. Schambari grabs a double leg and dumps Baker on his back. Baker locks on a triangle. Schambari twists, trying to get out. No sweat, these guys are dry, gonna be hard to get out. Schambari twists to his back but Baker still has it locked on. Schambari just waiting, starts landing some punches. Schambari moves back to his knees. Baker pulls down on his leg tighter and Schambari taps out. Baker had the triangle locked on for had to be nearly two minutes. Baker will face Shlemenko in the middleweight tournament finals.

Round 1 –  This is a bantamweight fight. Oshiro with a leg kick to the inside. Oshiro swings, Mamalis fires back, then goes for the takedown, ends up in a clinch. Oshiro jumps guard, pulls rubber guard. Mamalis with the ground and pound. Oshiro staying very active from the bottom. Mamalis not being too effective from inside the guard. Mamalis passes to side control. Oshiro landing shots from the bottom. Mamalis lands a couple of nice punches and an elbow. Oshiro pulls rubber guard again. Mamalis picks him up and slams him hard but still has rubber guard. Nice left from Mamalis. Oshiro back with the rubber guard pulling Mamalis’ head down. I give the round 10-9 to Mamalis.

Round 2 – Mamalis blocks a head kick. Nice right hook by Oshiro. Mamalis takes Oshiro’s back, drags him to the ground. Oshiro turtles up, Mamalis has hooks in. Oshiro taps out. Commentators call it a big upset.