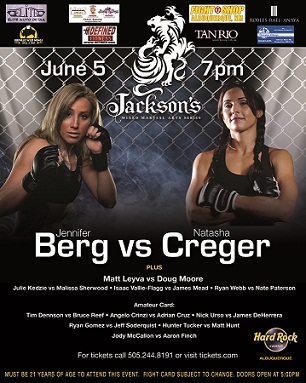 ALBUQUERQUE, N.M. – Greg Jackson, the world-renowned MMA coach of such fighters as Rashad Evans and Keith Jardine, is throwing his hat into the promotion business. Coach Jackson and Jackson’s Gym is presenting the “Jackson’s MMA Series I” on June 5, at the new Hard Rock Casino and Hotel in Albuquerque, N.M.

The fight card will feature five professional fights, two of which will be all female fights, and six amateur fights.

This will be a very special night for women’s MMA. The co-main event will feature Jennifer Berg from Jackson’s affiliate Grudge Training Center in Denver, Colo., taking on Chute Boxe fighter Natasha Creger from Long Beach, Calif. Both Jennifer and Natasha are accomplished strikers and both are extremely aggressive. This should make for an exciting stand-up war.

Julie Kedzie from Jackson’s MMA will be fighting former national wrestling team member and Olympic hopeful Malissa Sherwood, fighting out of Sacramento, Calif. Julie has been featured on the Tapout Reality show as well as fighting in the first televised women’s MMA fight on Showtime against Gina Carrano. Malissa is an accomplished wrestler with international experience.

Also on the card are fellow Jackson’s fighters Matt Leyva, Isaac Vallie-Flagg, and Ryan Webb. Leyva is competing in the co-main event, facing off with Doug Moore out of Gracie Arizona. Both fighters are taking fantastic records into the ring. Moore is undefeated at 7-0, and Leyva is 5-1.

Looking to add to their resumes and use this Jackson’s MMA Series to catapult them into a bigger organization such as the UFC or Strikeforce, are Isaac Vallie-Flagg and Ryan Webb. Vallie-Flagg is an experienced, well rounded fighter taking on James Mead.

Another Jackson fighter, Ryan Webb, is an up and coming fighter looking to make a name for himself with his fight against Nate Patterson.

“I think the MMA Series is really going to showcase what Jackson and all of our brother and sister schools are all about. It’s going to show what we have and how we are pushing to be the best. The fighters are going to have a place to show that and the fans will have a place to watch them.”