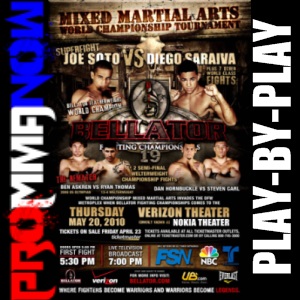 GRAND PRAIRIE, Texas – ProMMAnow.com is on the scene at the Verizon Theatre this evening for the semi-final round of Bellator Fighting Championships‘ season two welterweight tournament featuring Ben Askren vs. Ryan Thomas and Dan Hornbuckle vs. Steve Carl. The main event will feature a non-title fight between Bellator’s featherweight champion Joe Soto against submission expert Diego “The Octopus” Saraiva.

Bellator 19 will broadcast live on FOX Sports Net starting tonight at 7:00 p.m. CT and ProMMAnow.com will provide live results and play-by-play commentary. We will also be posting photos and video interviews from Bellator 19 following the event.

As a reminder, as we announced earlier today, the Bellator 19 post-fight press conference will air in a live stream on Bellator.com at approximately 11:15 p.m. ET/8:15 p.m. PT.

Round 1 – Carl comes out swinging and misses. But he goes get the takedown and Hornbuckle has full guard. Carl trying to work ground and pound but Hornbuckle defending well. Carl picks him up off the mat and slams him back down. Hornbuckle attempts a kimura and gets his one leg over the back of Carl’s neck. Hornbuckle rolls it all the way over so he is on top of Carl and it is a beautiful technique and Carl taps out. Hornbuckle really used his legs to hold Carl in place and used his arms to torque the kimura. Hornbuckle advances to the welterweight tournament finals.

Round 1 – Lots of bad blood in this one stemming back to their first fight. Askren chasing. Askren gets a body lock and takes Thomas down. Thomas has full guard. Askren passes to side control. Askren holding good control and looking to make something happen. He gets the mount briefly but Thomas is moving like a Mexican jumping bean staying very active. Askren stands up  briefly, Thomas gets full guard again but Askren moves to side control. Askren is doing no damage at all, but locks in an armbar, Thomas makes a great escape. Thomas goes to rubber guard a couple of times very briefly. Askren gets full mount, lands a few rabbit punches. Askren controlling from mount, Thomas bucks out and Askren goes for an armbar, Thomas escapes and ends up on top in full guard. ProMMAnow.com scores the round 10-9 Askren.

Round 3 – Thomas lands a couple punches then a knee as Askren moves in. Askren gets the takedown and is in side control. Askren gets crucifix again and goes back to landing rabbit punches. Thomas gets his hand out of the crucifix. Thomas gives up his back and Askren tries to take advantage but Thomas gets advantage and takes Askren back very briefly as Askren ever so smoothly moves back into top position and gets full mount. Thomas bucks but Askren holds on as Thomas gives up his back. Thomas rolls and Askren is back in full mount, but Thomas gives up his back, then rolls again. Thomas gives up his back again, then rolls over on his back once more. Neither fighter doing any damage in this fight. It’s been scramble after scramble. With about ten seconds left, Askren gets Thomas’ back and is looking for the choke as the bell sounds. ProMMAnow.com scores the round 10-9 and the fight 30-27 for Ben Askren. It’s Askren vs. Hornbuckle in the welterweight finals.

Round 1 – Joe Soto is the reigning featherweight champ. this is not a title fight though. Soto gets the takedown. Saraiva working from the bottom, looking for opportunities and throwing punches and elbows from the bottom. Saraiva using an open guard, still defending from his back. Soto landing a few good shots here and there from the top. Saraiva continually getting wrist control. Big elbow from Soto opens up Saraiva and he’s bleeding like a stuck pig. Soto stands and kicks the legs of his downed opponent. ProMMAnow.com scores the round 10-9 for Soto.

The doctor has stopped the fight. Holy cow, it is an enormous cut. ENORMOUS. The commentator at first said he disagreed with the stoppage because of the location of the cut, then he saw the cut and retracted the statement. It was nasty.