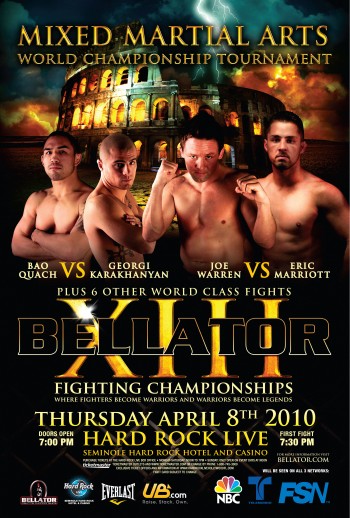 MONROE, La. — It is another week, and tonight is another round of the Bellator Fighting Championships second season. Bellator 18 takes place this evening at the Monroe Civic Center in Monroe, La. The event will be broadcast live on FOX Sports Net beginning at 8:00 p.m. ET and ProMMAnow.com will provide live results and play-by-play commentary during tonight’s telecast.

Round 1 – Warren makes first contact with a punch, body lock, and big slam. Georgi goes for an armbar, then a heel hook. Warren tries to beat off his clutch with hammerfists to the kidneys. Warren escapes, and gets on top in full guard. Krakhanyan showed he is dangerous on the ground, and goes for another armbar. Warren immediately steps over and properly escapes the submission attempt. Warren is back in Karakhanyan’s guard and looking for the ground and pound. Nice shots to the side of Karakhanyan, and Karakhanyan keeps threatening with different submissions. Karakhanyan with a leg kick with gives Warren the opening for another takedown. Warren stands up and Karakhanyan up kicks but does not connect. Warren goes in for the punch and ends back up in Karakhanyan’s guard, where he goes back to the ground and pound. Nice solid round for Warren 10-9.

Round 2 – Warren with a nice right then initiates the clinch. Warren showed great submission defense in round one. Karakhanyan goes for a double leg but no dice. Warren dips to pick Karakhanyan up and Karakhanyan jumps into a guillotine attempt. Warren escapes and suplexes Karakhanyan with an enormous slam. Karakhanyan attempts an armbar, it’s deep, Warren raises his hand looks like he may tap, no, he escapes once again. Warren delivers knee’s to the sides and butt of Karakhanyan as he is in turtle position. Warren still controlling on top of the crouched Karakhanyan against the cage. Warren still with the big knees to the thighs of Karakhanyan. Karakhanyan rolls and ends up with the full guard. Commentator questions if Warren’s arm may be hurt from the earlier submission attempt. Big right hand by Warren as he postures up inside the guard. Another round for Warren 10-9.

Round 3 – Warren takes a leg kick. Karakhanyan swings, Warren ducks and picks up Karakhanyan and almost slams him through the mat. Karakhanyan already looking for submissions off his back. Warren puts him against the cage again and starts in with those big knees to the thighs. Karakhanyan lands a big knee on Warren but Warren drives through with the takedown and puts Karakhanyan on his back. That knee cut Warren. Warren pushing Karakhanyan against the cage while standing, and delivering knees to Karakhanyan thighs. Warren clinches him and puts him back on the mat. Karakhanyan gets to his knees and then to his feet but Warren drags him back down with a body lock from the back. Warren reminds me of Clay Guida here with his relentless assault, locking and hanging onto Karakhanyan like a dog.  Karakhanyan locks on a very tight and deep guillotine. Blood is pouring out of Warren’s head as Karakhanyan squeezes. Warren’s defense slows as it looks like he may get submitted, no, he escapes once again! Big cheers from the crowd. They get back to their feet with just a few seconds left to go. Karakhanyan runs at Warren in a last ditch effort, he lands a flying knee then a right hook that connects solid, he throws a kick and Warren catches it and flings him to the mat. That’s it. What a finish to a great fight. Warren 10-9 for the round and 30-27 for the fight.

Notes: This was a great fight. Joe Warren has showed marked improvement, especially with his submission defense. With this win, Warren moves to the finals of the Bellator Season Two Featherweight Tournament and says in his post-fight interview that he is ready for either Wilson Reis or Patricio Pitbull, who fight next in the other semi-final bout of the evening.

Round 1 – Reis misses with a leg kick twice, then misses with a left. Pitbull lands a left hook, Reis shoots and gets stuffed. Leg kick scores for Reis. Both fighters land a punch, then exchange leg kicks. Reis shoots, gets the takedown, lands inside Pitbull’s full guard. Reis attemptint to pass the gaurd, gets half guard, and keeps trying to soften Pitbull up with rabbit punches. Pitbull using butterfly guard and good defense. Pitbull gets up, reverses, now on top of Reis pusing him against the cage. They scramble, Reis stands, gets a single leg, lets it go and is pushing Pitbull into the cage. Pitbull now on top, but Reis gets up, looking for a double leg. Reis gets a single leg takedown but Pitbull pops right up. Close round with virtually no damage done but I score it for Reis 10-9 for control, takedowns, and leg kicks.

Round 2 – They touch gloves. Head kick from Pitbull misses. They clinch, Pitbull attempts a hip toss but fails, then throws a flying knee that misses. Reis grabs a single leg, presses Pitbull against the cage. Pitbull reverses position briefly, jumps with his free leg and lands two knees on Reis’ head, but Reis never let the leg go. He lets it fo after about a minute or more. Reis catches a kick. Pitbull lands a one out of two punches. They square up in the center of the cage and exchange kicks. Flying knee by Pitbull but does not connect solid. They clinch, knee to the face by Pitbull. Leg kick by Reis, then he grabs a single leg. Reis can’t get the takedown as Pitbull sprawls. Pitbull stands over Reis and lands a couple of kicks to his downed opponent’s legs. Another close round. I give that one to Pitbull 10-9 (but I wouldn’t argue if someone gave it to Reis).

Round 3 – Leg kick by Reis. They exchange punches and bump heads. Head kick by Pitbull partially lands. Left, right by Pitbull, then he clinches and slams Reis to the mat with a belly to belly suplex. Pitbull on top of Reis, he stands, lets Reis up. Leg kick by Reis, Pitbull lands an uppercut. Pibull lands a nice body kick, then a right hand. Leg kick by Reis. Reis shoots, but gets stuffed. Pitbull lets Reis up. Reis can’t find his range with a few strike attempts. Pitbull lands a nice knee kick to the face as Reis moved in. Reis gets a takedown, but Pitbull immediately gets underhooks and gets to his feet. Pitbull is winning this round big time. Pitbull now on top in guard, he stands up and lets Reis stand. Reis goes for a trip takedown, can’t get it as the bell sounds. I give the round 10-9 and the fight 29-28 to Patricio Pitbull.

Notes: Patricio Pitbull advances to the Bellator Season Two Featherweight Tournament finals, where he will face Joe Warren, who defeated Georgi Karakhanyan earlier tonight. Seeing how both of these guys performed tonight, I will definitely be choosing Joe Warren to win that fight.

Round 1 – Hector Lombard lands a one-two, right-left combo and the fight is over in six seconds flat. Jay Silva falls flat on his face and the Bellator Middleweight Champion pounds his chest in victory. Wow! Another Bellator KO highlight!