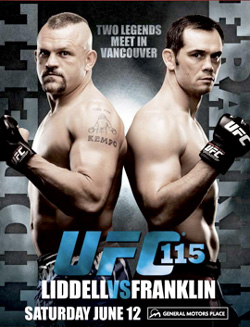 Matt Wiman vs. Mac Danzig,
Evan Dunham vs. Tyson Griffin To Be Featured

The first bout scheduled to air on Spike TV is in the lightweight division, and features a former winner of “The Ultimate Fighter,” as Mac Danzig (20-7-1) squares off against Matt Wiman (11-5).  Fighting out Los Angeles, CA, Danzig was the winner of Season 6 of “The Ultimate Fighter,” defeating Tommy Speer to capture the crown.  He most recently defeated Justin Buchholz at UFC 109, and he hopes to make it two in a row by defeating Wiman at UFC 115.

Hailing from Dallas, TX, “Handsome” Matt Wiman appeared on Season 5 of “The Ultimate Fighter,” and notched his first win in the UFC at the season finale against Brian Geraghty.  He boasts a 5-3 record inside the UFC Octagon™, with wins over Thiago Tavares and Shane Nelson on his resume, as well as a Fight of The Night battle against Sam Stout.  Widely respected for his toughness, Wiman hopes to emerge from his bout with Danzig with his hand raised, and still “Handsome.”

The evening’s second televised bout is also a lightweight contest, and pits rising star Evan Dunham (10-0) against longtime contender Tyson Griffin (14-2).  Training with Xtreme Couture in Las Vegas, Dunham has won his first three contests in the UFC against Per Eklund, Marcus Aurelio and Efrain Escudero.  Compiling an undefeated record in the UFC, with only two bouts going to decision, Dunham will be looking to use his effective mixture of striking and grappling ability to take out his toughest opponent to date, his teammate Tyson Griffin.

Tyson Griffin has defeated an impressive roster of opponents en route to his 7-2 record with the organization, including wins over the likes of Clay Guida, Hermes Franca and Gleison Tibau.  With his aggressive striking, he is also widely known as one of the most exciting fighters in the UFC, having captured “Fight of the Night” honors five times during his career.  He’ll look to make it a sixth time with a victory over Dunham.