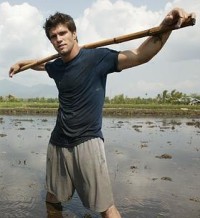 Born in Chicago, IL, Jason “Hollywood” Chambers, as he is known in the MMA world, is a former professional fighter with a record of 18-5. Perhaps best known as the host of the hit History Channel Series “Human Weapon,” Jason traveled the globe to explore the history and techniques of various martial arts as part of the show. A diverse artist in every sense of the word, Jason is a certified Jeet Kune Do Concepts Instructor, and a brown belt in Brazilian Jiu-Jitsu. Jason’s career, though, has often blurred the lines between cage and stage. Jason has been involved in the entertainment field since 2002, when he began to study the craft of acting in Chicago at “Act One” studios, and improvisation at the world famous “Second City.” Chambers solidified his decision to pursue the entertainment field in 2003 by moving to New York to further study his craft, while continuing his BJJ training at Renzo Gracie’s academy. He quickly landed appearances in established television series such as “Guiding Light,” “All My Children,” “Can You Tell?” and most frequently on “As the World Turns.” Jason has done numerous commercials and has also been a guest star on “Days of Our Lives,” “The Middleman,” and “CSI NY.” In addition to acting, Jason can be seen on G4’s “Attack of the Show,” where he gives his insights on upcoming MMA fights in their “MMA Chokehold” segment, and in FIGHT! Magazine, where he is a regular contributor. Jason continues to train in BJJ and MMA in his free time. His unique combination of in-the-cage and on-the-air experience will bring great insight to Shine Fight fans worldwide.

Regarding “Worlds Collide,” Chambers had this to say: “Growth is needed to sustain life. I believe the same is true for the sport of MMA. Thanks to the growth of MMA, we now have a plethora of talented fighters who want to make their mark. Shine Fights has stepped up to the plate with a team of people who come from this sport and genuinely care about the fighters. Our matchmaker, Ron Foster, has done an amazing job of balancing our talent pool with seasoned vets and future stars. Shine has created a win-win scenario for the fighters and fans.”

“Worlds Collide” is the perfect tag for this matchup,” said Chambers in relation to the main event. “Ricardo Mayorga is one of the most entertaining fighters to ever hit the boxing circuit. His hot-headed style coupled with his heavy hands propelled him to hold the WBC Championship belt. One solid Mayorga punch, and it could easily be lights out. On the other side of the fence lurks Din Thomas, who is riding a three-fight win streak. Din knows that in a fight, anything can and often will happen. I think Din feels disrespected by Mayorga’s actions, and will be looking to make a statement on May 15th.

“WORLDS COLLIDE” is taking place at the Crown Coliseum in Fayetteville, NC, and will be beamed on PPV on cable and satellite in the United States and Canada. The event will be broadcasted in High-Definition, and it will be available in both English and Spanish (where available). The broadcast will start at 9 PM ET/6 PM PT and will be produced by MultiVision Media, Inc. There will be a 30-minute countdown show prior to the live event at 8:30 PM ET/5:30 PM PT. The event will be available for $29.95. Tickets may be obtained by calling Ticketmaster at 1-800-736-1420, or online at www.ticketmaster.com, or in person at the Crown Coliseum Box Office. For box office hours and more info, please call (910) 438-4100.