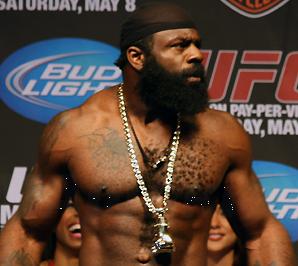 MONTREAL – After going 1-1 inside the Octagon, Kimbo Slice’s (4-2) days inside the UFC are over. UFC President Dana White made the announcement at the “UFC 113: Machida vs. Shogun 2” press-conference late Saturday night following Kimbo’s second round TKO loss to TUF 10 cast mate and former NFL football player Matt Mitrione (2-0).

Kimbo made his name as a bare-knuckle brawler in the underground Miami fight scene. His brutal fights were recorded on video, uploaded to Youtube, and the man became a cult legend.

As professional mixed martial arts became more popular, a now defunct promotion by the name of EliteXC signed Kimbo to a contract and put him on national television for the world to see. Kimbo won his first three fights against questionable opposition.

In Oct. 2008, Kimbo was slated to fight UFC Hall of Famer Ken Shamrock (27-13-2)  on prime time CBS television. At the last moment Shamrock pulled out of the fight due to injury and was replaced by a virtually unknown light heavyweight by the name of Seth Petruzelli (11-4). Petruzelli knocked Kimbo out in just 14 seconds.

In an interview shortly after the fight, Petruzelli said EliteXC officials had asked him to keep the fight standing. Of course an allegation of this sort against a mixed martial arts promotion was blasphemous. Petruzelli later retracted his statement, but it was too late, the damage was done, and EliteXC never held another event.

Kimbo took White up on his challenge and joined the cast of TUF 10. Kimbo’s appearance on the show brought huge ratings to the network, and although he lost his first fight on “The Ultimate Fighter”, White rewarded him with a bout against light heavyweight slugger Houston Alexander (9-6) at the culmination of the season.

In Dec. 2009, Kimbo defeated Alexander via unanimous decision. It was not a pretty fight but Kimbo had officially defeated a real live UFC veteran inside the Octagon, something most people, including Dana White, never thought would happen. And because of this he was granted one more shot.

Unfortunately for Kimbo, he looked absolutely atrocious against Matt Mitrione. He looked so bad in fact, White immediately declared Kimbo’s time was done. Few fighters in the UFC are ever released after just one loss, much less 1-1. White explained his reasoning in an interview with Fanhouse following UFC 113:

Like I said before, Kimbo took me up on the challenge. He could have done a lot of freak show fights and done a lot of different things, but he stepped up to the plate. He took the challenge, came on The Ultimate Fighter. I’m happy to have met Kimbo Slice. He’s not who I thought he was. He’s a good guy, he came in, he worked hard. He’s done everything he could to evolve as a mixed martial artist and he won that fight. He won that fight to get him this fight, against Houston Alexander, and he lost tonight. Kimbo Slice is no different than any of the other guys that don’t make the cut and end up getting cut from the UFC. He’s impressed me as a human being and as a fighter, and I like him and the guys who represent him very much. I’m glad to have met Kimbo Slice.

There is no doubt though Kimbo still has an enormous fan base. Why not take advantage of that? For White, it is more about the integrity of the sport.

It would almost be worth it to pay Kimbo Slice a salary not to fight. If White does not want to use him, why let another competing organization pick him up? Win or lose, Kimbo still intrigues people and brings a different demographic to the sport.

UFC or not, this is not the end of the Kimbo Slice story.