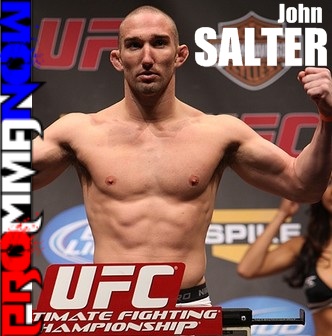 Alabama’s John Salter (4-1) will face Canadian Jason MacDonald (24-13) at “UFC 113: Machida vs. Shogun 2” Saturday night in Montreal. It will be Salter’s second fight in the UFC and it won’t be an easy one. He will be facing a very dangerous veteran on his home turf.

ProMMAnow.com spoke with Salter this week about the upcoming fight with MacDonald and how he feels about fighting in Canada. We also talked about how he was able to make it to the UFC so early in his career, where he is training, and much more.

JB: Hello John, thanks for speaking with us at ProMMAnow.com. You are fighting this weekend at UFC 113 in Montreal against Jason MacDonald. This is your second fight in the UFC. How excited are you to get back in there and give it another go?

JS: Yes I am very excited to fight in the UFC again. I plan on putting on a good show this time.

JB: Your first fight in the UFC was at Fight Night 20 against Gerald Harris. Unfortunately, things didn’t quite go your way in that one. Could you talk a little about what it was like for you the first time in there and your assessment of that fight looking back?

JS: My first fight in the UFC was against a great fighter on six days notice. I’m glad that I did it, but I didn’t get a chance to show who I really am as a fighter.

JB: Tell me, how does someone such as yourself win four professional fights and then get called up to the UFC; how did this happen so early for you in your career?

JS: Yeah, I have had the opportunity to fight for the UFC pretty early in my career. I believe that is because of the competition that I have fought. I fought Roberto Traven in my second pro fight, then Hammortree, and then Jeremiah Riggs.

JB: Speaking of James Hammortree, who is on this season’s “The Ultimate Fighter.” What is your opinion of him, and is it a bit odd seeing someone you defeated on the show, like maybe you deserved that spot instead?

JS: Hammortree is a very good and well rounded fighter. It was a very tough fight. I think it was pretty close until I subbed him. It doesn’t bother me that he was on TUF. I think he deserved it. I am happy with where I am in my career so I am happy for him.

JB: So, you are getting ready to fight a very experienced Jason MacDonald. He was with the UFC for about three years, he got cut, put together a few wins, now they are bringing him back for this event. What are your thoughts on facing MacDonald and how important is this fight for you?

JS: I think that MacDonald is going to be very tough. I expect him to fight through every bad position, but I also think that I will be able to keep putting him in bad positions.

JB: Obviously, this would be an enormous win for you. Does the fact you have to face MacDonald on his home turf concern you at all, or does it give you more motivation to whip up on him in front of his home crowd?

JS: This won’t be the first time that I have gotten booed. I actually got booed by everyone in the Hammortree fight, so it doesn’t really bother me.

JB: What is your sports / martial arts background and how did you transition into MMA?

JS: I wrestled all the way through high school and college so that is my background, and I think that it really helped me get a good start into MMA.

JB: Are you still training with Spartan Fitness in Birmingham, Alabama? Who are your coaches and training partners you work with down there?

JS: I am actually no longer with Spartan. I have been with Headhunter Combatives for a little over a year now. I train with some great guys down there. On of my main training partners is a pro at 205, Chris Davis.

JB: What are your thoughts on the MMA scene in the South and do you feel more fighters are starting to get their shot and get recognized for their talent in the South? Is that something you’ve noticed or have thought about and do you take any sort of pride in representing the South or does that not really matter to you?

JS: Yeah, MMA in the South is not as big as it is in many other parts of the country. I think that it is slowly growing, and it will continue to grow as long as fighters from the South continue to do well.

JB: Thanks so much for talking with us John. Are there any sponsors you would like to thank, or send any shout outs?

JS: First I want to thank God for giving me the ability and opportunity to compete. I also want to thank South Eastern Pond Management, Shadey Oaks Landscaping, Terra Lane, Wades Pawn and Jewelry, Tidwell Chriropractic, and everybody that helped me get ready for this fight.