Fighters hit the scale for MFC 25 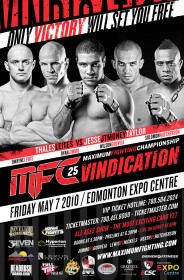 In front of the largest weigh-in crowd in the organization’s history, all the fighters hit the scale on Thursday afternoon in preparation for the Maximum Fighting Championship’s MFC 25: Vindication.

Before a huge throng of media and fans, the fighters were on stage inside City Centre Mall in the heart of the downtown Edmonton, Alberta, and all but one of the 18 fighters assembled for the best card in MFC history met their contractual weight target. Right on the money for his middleweight main-event spot was Jesse “JT Money” Taylor who weighed in at 184 1/2 pounds, while his opponent, Brazilian star Thales Leites, hit at 185 1/2 pounds.

In the co-main event, light heavyweight hometown star Ryan “The Big Deal” Jimmo was perfect at 205 pounds, but rival Wilson Gouveia was off the mark as he weighed in at 208 pounds. As per the rules of the Edmonton Combative Sports Commission, Gouveia forfeits 20% of his purse to Jimmo.

Here is the complete list of fighters and weights for Friday’s matchups which will be live on HDNet Fights from the Northlands Expo Centre in Edmonton, Alberta.