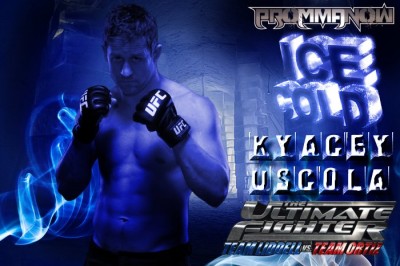 What up peeps. Back to the over-training issue. I still do not think Kris should have been breaking down his muscles like he was two days before a fight and I think more light will be shed on this issue a little later on in the show.

Don’t get me wrong, Tito was a great coach. I just thought he should have told McCray to chill out on the workouts we did after we knew he was fighting. I love to work hard and train hard, just not the day before my fight, but that’s just me.

McCray fought like he just had two hard workouts the day before a fight, enough said.

Court and Ring had a great technical fight. Both those dudes are legit fighters. Ring kills me with his mannerisms. The “Oh no you didn’t,” was hilarious.

I enjoyed Ring and Court on the show. Both stand up dudes. The decision was right I think. I thought the second round could have gone either way but it was a legit decision. Nick’s kickboxing is what won that fight for him. Those knees to the thighs and inside leg kicks did a lot of damage and you could hear them echo from the impact.

So now Team Ortiz is back in the driver’s seat but it doesn’t do us much good since there are only two guys left that haven’t fought yet, so it’s only a process of elimination for the next fight.

The wild card is still up for grabs and there are a lot of guys that deserve it now. A couple people are gonna be pissed they didn’t get an extra shot.

I was a little disappointed in myself with my potty mouth, I wasn’t a happy camper at the time and I just didn’t understand McCray’s training methods, and our coaching methods at the time for that matter.

I think next week will be a bit more action-packed.  Till next week peeps.