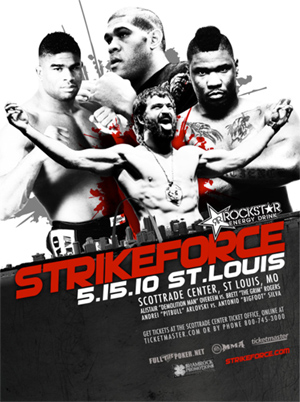 Strikeforce Heavyweight Champion Alistair Overeem and title challenger Brett Rogers joined the media on a conference call Tuesday, May 4, in anticipation of their main event bout at “Strikeforce: Heavy Artillery” scheduled for May 15, at the Scottrade Center in St. Louis, Mo.

The following podcast is a recording of the Overeem/Rogers call in which the fighters, as well as Strikeforce CEO Scott Coker, fielded question on topics that included strategy, training, steroids, Fedor Emelianenko, and much more.

Highlights from the Overeem/Rogers Conference Call:

ALISTAIR OVEREEM: “I’m happy to be fighting in the states again.  As Scott said, it’s been too long.  I injured my hand, but right now I’m really fit and ready to get it on.”

BRETT ROGERS:  “It’s a great thing to be back in the mix and put on a great show and show people what I’m capable of doing. Like Scott said, I’ve been kind of gunning for this fight for the last year or so. I’m hungry for it. I’m ready.”

Alistair, what do you know about Brett?

OVEREEM: “He’s a big guy, strong guy.  He performed really well against Fedor. He gave him, I would say, the fight of his life.  I’m really prepared for anything that he’ll throw at me.  It’s going to be a really good fight, a really good matchup.  People are going to want to see this battle.”

Alistair, if you win, what’s in it for you?

ROGERS: “It has to be a win-win situation for me because Alistair has kind of been out of the mix in America for a long time. I’m not just speaking for myself, but I’m speaking for all the other heavyweights out there gunning for this dude.  Plus, my last fight against Fedor I felt it should have went a certain direction, but it just so happened that I didn’t get lucky that night. I know for a fact that if I have a second shot at him it definitely will be a lot different. I’m not looking past Alistair, but I feel it’s going to be a tougher second fight.  I want that rematch with Fedor and it’s definitely going to look a lot better when I get in there and snatch this title and get this second shot.”

Alistair, can you talk about your dedication to defending this title?

OVEREEM: “Well, like I said, I’m looking forward to defending my title. I think if it was up to me it would have happened last year.  But, I had my hand injury which took a lot of time to recover.  You’ll see me May 15 and maybe one or two more times this year.”

Does Brett Rogers deserve a shot at the title?

OVEREEM: “You know, I’ll fight anyone they put in front of me. I think Brett did one hell of a fight with Fedor.  Fedor doesn’t want to fight me, that’s very simple.  Also, I need to defend my title.  People are starting to talk about it, so the fight is for the title.

“I know Fedor is like me, he doesn’t care who he fights. It’s the management. But, it takes two to tango.”

Brett, what are your thoughts on getting the title shot?

ROGERS: “I just feel that the time is now. I’ve been very dedicated to this sport.  Alistair has been kind of doing his thing while people in the West have been trying to move forward. I feel like he has been kind of slowing me down with the things that I’ve been trying to do.  I definitely feel like I deserve this title when it comes down to it.  It just kind of makes sense.  I just want to get out there and prove it to the world that I’m getting that title. It is what it is. I don’t care what anybody else says.”

Alistair, is the U.S. you’re priority for this year?

OVEREEM: “The United States is my priority.”

How long have you been looking to fight Fedor?

OVEREEM: “I think about a year and a half now.  I’ve been challenging him in interviews and after fights.  As far as obstacles, his management had been putting it off.  It takes two to tango.  We’re just going to have to wait and see.

“This fight with Brett coming up is going to be very interesting. I think the people are going to love to watch it.”

Alistair, how do you want to approach Brett Rogers?

OVEREEM: “I never talk about strategy before a fight.  Afterward, I’ll be happy to discuss any details.”

Brett, do you want to comment on your strengths?

ROGERS: “You know what? I kind of want to fall back on questions like that, too. I don’t want to really talk about strategy. I’m coming out there to win it.  I’m a fighter just like everybody else.”

Do you think fighting in a cage is an advantage for you?

ROGERS: “I would say so because I know he’s real comfortable fighting in a ring, but we’ll see how it plays when he comes back to the cage.”

Brett, what mistakes do you think you made against Fedor?

ROGERS: “I’m probably going to keep those to myself, but I definitely learned a lot of things that are going to help me win in the future, a lot of small things.”

Where do you guys see this going?  Do you see it hitting the ground?

ROGERS: “I’m down for whatever.  Whatever happens, happens. He’s the champ so he’s obviously supposed to come over here and put a working on me, right? I’m definitely just going to go with the flow and capitalize on whatever.  That’s how I see it?”

Brett, they say a fighter learns more from a loss than a win.  Do you see that as the case?  How did that being your first loss affect you?

ROGERS: “It affected me deeply.  I have lots of love for the sport. I love what I’m doing, so it kind of affects you a little bit. I was on a winning streak and I was kind of just hoping to blow through and get the title without a loss.  But, you learn a lot more with a loss than a win.  Anybody can tell you that. We’ll see how it goes on May 15. We’ll calm down the mistakes.”

Alistair, do any of the doubters make you lose focus?

Do you want to make a statement in this fight and shut people up?

Brett, can you talk about your most recent training? I know you left Minnesota for California.

ROGERS: “It’s just a change of pace. This is an important fight, it’s a title fight.  Five, five-minute rounds can take a toll on you so it was important for me to step up my conditioning.  I went out to the West to the Body Shop.  I needed the conditioning and also the techniques that I’d like to show. Right now, I’m in Vegas at the Randy Couture gym.  I’m kind of all over the place trying to pick and choose the best of the best and try to figure out a new strategy.

Alistair, where are you training?

Does travelling to the U.S. hurt your training?

OVEREEM: “No, it doesn’t.  But that’s why I stay in Holland until the last moment possible. I don’t like to train here and arrive three weeks before the fight.  Because then you’re messing up the schedule. I train the best at home. There’s no stress.”

Brett, how has your life changed since you last fought in St. Louis?

ROGERS: “Since I last fought in St. Louis, man, it’s changed a lot.  I’m definitely getting a lot of credit, a lot of good compliments as far as how my career is going from everybody, people in the MMA world and people in the working world. I get both parties. I feel good, it gives me more confidence.  It helps me just always go out there and bring the best of the best.”

Brett, there’s a lot of big talent at heavyweight.  What have you done to prepare for Alistair?

ROGERS: “What have I done?  I’ve stepped up the game. Every fight I always step up the game, somehow, someway.  I don’t like every fight to look the same; you know what I’m saying?  Some guys have 20-30 fights and you can go back and see pretty much the same thing.  I’m kind of changing up the strategy a little bit. I’m going to go out there and give the world what they want to see.”

Alistair, what are you going to do differently than Andrei Arlovski did against Fedor?

OVEREEM: “Well, I don’t talk about strategy before the fight, so you’re just going to have to wait and see what will happen.  I can tell you it’s always a surprise with me. I’ve been training for a long time now, 15 years, and I know a lot of different techniques.  Let’s just say I have some interesting techniques planned for this fight, but you’re going to have to wait and see when I come out of the box.”

Brett, you got some criticism when you were announced as the challenger.  Do you see that as motivation?

ROGERS: “It’s definitely motivation, man. I’m the type that everything positive or negative is going to make me that much stronger. This is the type of fight that I have wanted for a long time. It’s not something that I’ve taken it very lightly. People are just holding the Fedor loss against me. People think I don’t deserve it, so I’m feeling a lot of pressure to do anything to prove it.

“Alistair is a big dude and he’s very confident. I like fighting people like that.  He reminds me a lot of Arlovski.

“I feel no pressure whatsoever. I’m getting tired of getting harassed in the gym.  I’m just ready to get it on.”

Brett, what is the biggest benefit that you’ve received from moving away from Minnesota?

ROGERS: “I love my training in Minnesota, but I feel that I’m back.  I’m out of town, new personalities, new bodies, they don’t know about me and I don’t know about them. When it comes down to it, I don’t care what happens.  The pressure needs to be constant; I’ve got constant big bodies and less pressure. There’s more support and less distractions.  Out here, all I have to think about is doing three things: wake up, work out and whoop ass.”

Alistair, it’s been over two years since you’ve fought for STRIKEFORCE.  Do you think you’re fights in Japan have prepared you for Brett Rogers?

Alistair, why do you think Fedor’s management doesn’t want you to face him?

OVEREEM: “I don’t know. I think they want to keep Fedor’s status as undefeated.  They see me as a threat to that.”