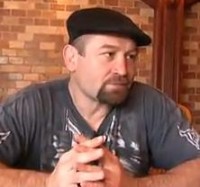 “The Janitor” Vladimir Matyushenko (24-4) shares a Russian meal and vodka with MMA H.E.A.T.’s Karyn Bryant and they discuss his upcoming bout with Jon “Bones” Jones (10-1). The bout is scheduled to take place on the “UFC on VERSUS 2” card on Aug. 1, in Salt Lake City, Utah.

Jon Jones at 22-years-old is much younger and less experienced than Matyushenko. However, Jones will most likely be considered the favorite. The 39-year-old “Janitor”, who is 5-2 in the UFC, said he enjoys being the underdog.

Vladimir said some of the training partners he is currently working with include Jared Hamman, Fabricio Werdum, and Renato “Babalu” Sobral. “The Janitor” gives us a peek at his fight contract.