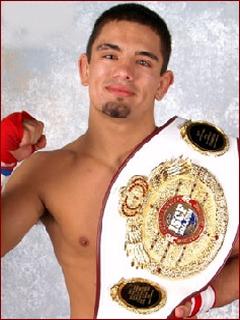 CHICAGO, Ill. (April 30, 2010) — Danny Tims, whose red mohawk and compelling personal story made him a media darling in his hometown of Kansas City in the run-up to Bellator 16, has earned a spot in Bellator Fighting Championships’ Season 3 Bantamweight Tournament with his hard-fought victory over Brian Davidson at last night’s event.

The announcement, which was made by Bellator founder and CEO Bjorn Rebney at the conclusion of last night’s event, makes it official that Bellator will indeed host a bantamweight tournament in its third season as has been rumored for some time. Additional tournament fighters will be announced in the coming weeks.

“Danny’s win over Brian Davidson included some great back-and-forth action; it was probably the night’s best all-around fight,” Rebney said. “With his win, Danny earned a spot in an eight-man field that already has some hugely talented bantamweights locked in. We will be announcing more of them in the coming weeks.”

The 22-year-old Tims, a mainstay on the Midwest MMA circuit since turning pro while he was still a teenager in 2007, improved his overall record to 9-2-1 with the win over Davidson.

The fight, which did not air as a part of Bellator’s live broadcast on FOX Sports Net, is now available for viewing exclusively at Bellator.com.