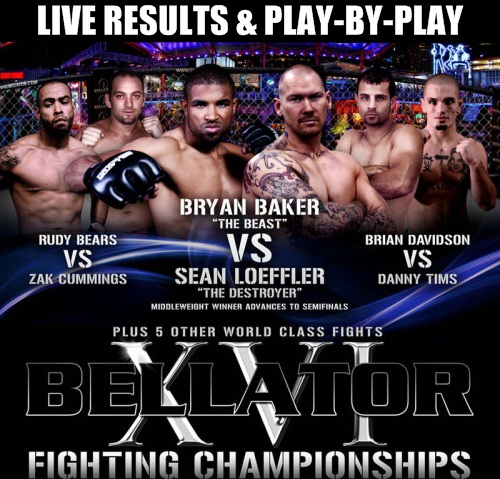 Middleweight Tournament quarterfinal
Matt Major has some very interesting fight shorts on that the announcers said he designed himself. The have polka-dots and tassles. They said Matt Major is into fashion design and Major said his interests include art, fashion, and sewing. Not hobbies you hear everyday from a fighter. The have Matt fighting out of San Jose, Calif. Shlemenko has won 12 of his last 13 bouts.

Middleweight Tournament quarterfinal
Round 1 – Loeffler recently lost his friend and trainer Hector Gil just a couple weeks ago. Right hand by Baker. Baker lands a left then a right hand. Leg kick by Loeffler. Baker grabs a body lock and trips Loeffler to the ground. Loeffler has an open guard on Baker. Baker stands and passed guard to side control. Loeffler goes for a leg lock, Baker escapes and lands a huge punch to his mid-section that hurts Loeffler. Baker then rains down the heavy punches over and over, Loeffler covers up, rolls to his stomach, and offers no defense. The ref has to stop it.

Middleweight Tournament quarterfinal
Round 1 – Jared Hess gets a big takedown and ends up in McGivern’s full guard. Hess stands up and dives in with a punch, lands in side control. McGivern gets butterfly guard, and lands some punches from the bottom. Hess dives into side control again. McGivern gets guard briefly, Hess stands up and dives in with a shot. Up kick by McGivern before Hess dives in again. McGivern  has butterfly guard. Hess stands up, dives in again with a punch. Nothing much is landing for Hess but he is maintaining control. Hess gets side control with 45 seconds left in the round. Hess nearly gets a crucifix position on McGivern before the bell sounds. ProMMAnow.com scores the round 10-9 for Jared Hess.

Round 2 – Left hook for McGivern. Hess shoots, gets a single leg, McGivern sprawls, but Hess does not let it go and drives through and puts McGivern right back down again on his back. McGivern gets to his knees and grabs a leg of Hess, going for his own takedown. Hess jumps guard into a guillotine as McGivern puts his head in danger looking for the takedown. It’s over, McGivern taps out.