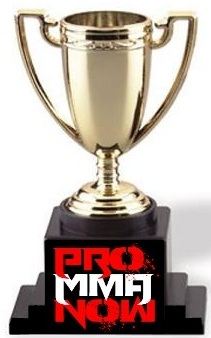 Since the last time we did this, ProMMAnow.com’s changed a bit.  That’s right… we started exercising regularly, got a little lipo, and threw in a boob job for good measure.  So, now that we have some new-found confidence (albeit phony over-compensation for our daddy issues), we figured it was about time to unveil our latest rankings for you to ogle.  While we prefer eye contact, it’s OK if you sneak a peek below, if you know what I mean.  We don’t mind… I mean, why else would we have had all the work done?  Anyway, we’re doing the rankings once a month (until the boss decides he wants a change).  And instead of re-inventing the wheel every month, from here on out, fighters will climb or fall depending on activity in the interim.  I know, I know… that means the rankings won’t have a lot of movement… not unlike the chick you lost your virginity to.  Bad times, pal.

Just to refresh, the rankings are compiled by me, Mike Menninger.  “Who is Mike Menninger?” you might ask.  Or you might not.  Either way, I’m a self-proclaimed MMA economist and philosopher – considered by many (me) the John Locke/Adam Smith of mixed martial arts.  If those references are too obscure for you, do yourself a favor and trade in the bong for a book every once in a while.  A little education never hurt anyone (unless you learned about herpes from that crazy night second semester junior year with the absinthe and that weird chick who inexplicably had an adam’s apple.  Also, he/she was not impressed with your performance either).  I’m also the co-host, along with ProMMAnow.com writer Brian Furby, of The Cageside Beat radio show.  Although, I do wonder why Furby gets to be “the host” and I’m relegated to “co-host.”  Probably because I let him do the introduction.  I really should get my agent on that.

Anywho, the rankings are not scientific or formulaic.  Why the hell would they be?  I’m a philosopher! No numbers can harness my bullsh**!  But I do put in a good amount of work researching various computer rankings across the internets, examining recent fighter activity, and considering whether or not I like the guy.  No fighter is ranked in more than one division.  I’ll also be tossing in some commentary to keep you (me) amused, or at the very least, on the website a little longer.

As always, please feel free to comment below or send me threatening and/or offensive e-mails at menningerm@cagesidebeat.com.  I promise to respond to every one of them.  In fact, if I get any good/funny e-mails, I’ll give the author a shout-out on the radio show.

Welcome to the April 2010 edition of the ProMMANow Fighter Rankings, where Frank Mir apologizes and actually means it, Anderson Silva is a classy guy, and James Toney vanishes like an overweight, unintelligible apparition in the night.

“Showdown” Joe Ferraro agrees with me… the UFC should add the lighter weight classes, and the WEC cream of the crop should be folded in.  Make the WEC the AAA to UFC’s big leagues.  I think it’s a great idea on its own.  And hell… maybe some of the fighters in other organizations will want to make the leap.  But, come on, Zuffa… gotta start paying the little guys!  And there’s some movement in the rankings because a lot of the guys have been idle since the last rankings came out.

So what the F do we do now that Penn lost?  Does anyone think that Edgar will be a favorite against whoever he fights next?  If a Gray Maynard is undefeated in the UFC with a win over the current champ, does Joe Silva hear it? Is there a bigger jackass than Aoki?  Good luck finding the answer to any of these?

It would be nice if the UFC could get some decent talent in this division.

Everything is crazy with the MW division.  We have a clear #1 who doesn’t give a sh**.  The fall-off to #2 is practically a bottomless trench.  And all the other top MWs keep beating the crap out of each other, inside and outside the UFC, which makes it pretty tough to rank.  Of all the division rankings, I’m the least comfortable with these.

Also known as The Division Where the Best Fighters Don’t Fight All That Often.

This edition of the HW rankings brought to you by Roy Nelson’s gut.  All rights and french fries reserved.  On a side note, how about that Strikeforce title shot coming up?  Good match making, huh guys? Is there another guy in the mix here?  No?  OK, moving on!