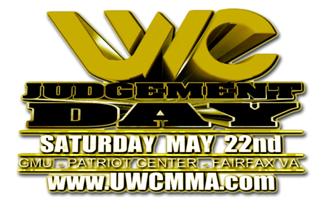 Tickets On Sale Now at All Ticketmaster Outlets

Washington D.C. (April 21, 2010) – UWC® 8 JUDGEMENT DAY is coming! Ultimate Warrior Challenge (UWC) founder and CEO S. Marcello Foran announced that the east coast’s professional MMA leader is making its highly-anticipated return to the Washington D.C. region (its sixth area show) with UWC 8 JUDGEMENT DAY scheduled for Saturday, May 22, 2010 at George Mason University’s Patriot Center in Fairfax, VA. Tickets, starting at only $28.50, are on sale and can be purchased at all area Ticketmaster outlets and through www.ticketmaster.com.

Easton, a Brazilian Jiu-Jitsu Black Belt fighting out of the Maryland-based Lloyd Irvin Martial Arts, possesses an arsenal of weapons led by his powerful striking and solid submissions which he has utilized in posting nine wins in ten bouts.  Currently ranked 25th in the world by the USA TODAY / SB Nation Consensus MMA Rankings, the D.C. native has successfully defended his championship twice since defeating Justin Robbins to win the belt on February 21, 2009. He remains a crowd favorite with his attractive fighting style, easygoing nature outside of the cage and an infectious enthusiasm for the sport.

Diaz enters the championship bout with world-class experience as a former two-time King of the Cage World Champion and Canadian Muay Thai Champion, among other accolades achieved during his ten-year pro career.  Originally from Canada now fighting out of Arizona Combat Sports, he has notable fights against Abel Cullum, Nam Phan, Eddie Yagin, Steve Claveau, Kola Koka, and Thierry Quenneville while competing in top promotions such as Shooto, Superbrawl, Shootboxing Japan, K-U Japan and Abu Dhabi.

Follow all the UWC action on the following official links: