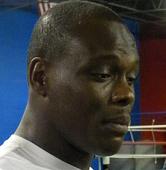 ProMMAnow.com spoke with St. Preux on Wednesday at Strikeforce’s open workout held at Nashville MMA. What we really wanted to know is if we would possibly get to see another calf-slicer from the former Vol. That’s the submission that got him nominated for Inside MMA’s “2009 Submission of the Year.” He made no promises, but didn’t rule it out either.

Still very young in his MMA career, St. Preux’s athleticism, strength, size, and ever-developing skill practically guarantees him a spot in MMA’s elite organizations in the future. First though, he must get past Chris Hawk this Saturday night.

Be sure to check out our photos from Wednesday’s “Strikeforce: Nashville” open workout featuring Gilbert Melendez, Jason “Mayhem” Miller, Josh Schockman, Ovince St. Preux, Dustin West, and Dustin Ortiz. Stay close to ProMMAnow.com throughout the rest of the week for our extensive in-depth on-the-scene coverage of “Strikeforce: Nashville.”