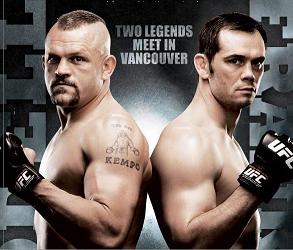 CHUCK “THE ICEMAN” LIDDELL VS. RICH “ACE” FRANKLIN AT UFC 115

Las Vegas, NV (USA) – “Fans and media have been asking me for weeks what is happening on The Ultimate Fighter® Season 11, saying things like ‘is Tito off the show, is Chuck fighting Rich.’ Today, I’m officially announcing that Chuck Liddell will fight Rich Franklin at UFC 115.  I wish I could tell you why, but everyone’s just going to have to watch The Ultimate Fighter Season 11 on Spike TV. What I can say is that these are two UFC® legends, and they give everything they have in every second of a fight.  Both of these guys are looking to get back to the top of the light heavyweight division.  Liddell and Franklin at 205 pounds is going to be a war, and I can’t wait to do our first UFC event ever in Vancouver,” said UFC President Dana White.

“I’m ready for this fight, I’m in the best shape of my life, and I can’t wait to get back in the Octagon,” said Liddell. “I can’t tell the fans what happens in the Ultimate Fighter 11, you have to watch the show, but I’ll tell you how this is gonna end, I’m knocking Rich out.”

“Chuck is a gamer,” Franklin said. “He is a professional – take Randy for example. He and Randy are friends, but he didn’t have a problem fighting Randy and punching him in the head, so he sure won’t have a problem punching me in the head.  I’m excited about fighting Chuck, I’m going to give everything I have, and I look forward to giving fans a great fight in Vancouver.”

It’s been a dream match of fight fans for years, and this June, two of the greatest champions in the history of the Ultimate Fighting Championship® will face off and headline the first UFC® show ever in Vancouver, British Columbia, Canada. Former UFC light heavyweight champion Chuck “The Iceman” Liddell takes on former UFC middleweight champion Rich “Ace” Franklin in a historic 205-pound matchup at UFC 115 on Saturday, June 12, 2010, live from General Motors Place and only on Pay-Per-View.

UFC® Fight Club™ members will have the opportunity to purchase tickets to this event Tuesday, April 13 at 10 a.m. PT via the website ufc.com.  A special Internet ticket pre-sale will be available to UFC newsletter subscribers Wednesday, April 14 starting at 10 a.m. PT. To access this presale, users must register for the UFC newsletter through ufc.com.

UFC 115 will be available live on Pay-Per-View on iN DEMAND, DIRECTV, DISH Network, TVN, BellTV, Shaw Communications, Sasktel, and Viewer’s Choice Canada for a suggested retail price of $44.99 US/$49.99 CAN for standard definition or high-definition broadcasts (where available).

A fighter with dynamite in both fists and a champion that’s known around the world, Chuck “The Iceman” Liddell (fighting out of San Luis Obispo, Calif. / 21-7 professional record) has faced the best and beaten the best. With an amazing 10 knockouts in the UFC, and seven consecutive at one point, Liddell is considered one of the greatest strikers in UFC history. With wins over Randy Couture, Tito Ortiz, Wanderlei Silva and Vitor Belfort, this UFC Hall of Famer has cemented a legacy for himself in the sport of mixed martial arts.

A former high school math teacher turned world-class mixed martial artist, Rich “Ace” Franklin (fighting out of Cincinnati, Ohio / 27-5-0 1 NC) holds memorable wins over Wanderlei Silva, Matt Hamill, Jason MacDonald and Nate Quarry. The former UFC middleweight champion that holds 12 wins in the UFC has moved up a weight class and looks to make even more noise in the light heavyweight division when he takes on one of the greatest fighters the UFC has ever seen.